It's been a while since Dana, Katie and I were able to get the girls together for a play date and since it was another cold, boring winter day...we thought it would be nice to get together and let the girls have some fun. We spent most of the morning drinking coffee while Audrey, Addison and Nia chased each other around the living room, shared each others sippy cups, ate cheerios and played in Audrey's bedroom. We tried to get the girls together for a picture but we realized it is IMPOSSIBLE to get 3 fully mobile babies to sit in the same place at one time. So Dana had a brilliant idea...throw them in the crib!! 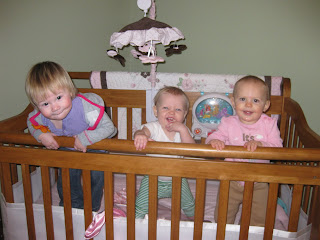 The crib turned out to be a pretty happening place! The girls were actually having a blast playing with Audrey's mobile and light-up rainforest toy. I was able to snap the first picture right away and it turned out SO cute! Let's just hope this is the only picture of all three of them behind bars :-) 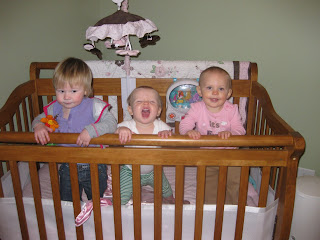 I was able to snap one more picture with all 3 of them looking forward, although Audrey sure had something to say in the last one :-) She is such a little ham. I tried to get one more shot but as I was playing with my camera, Nia tried to escape... 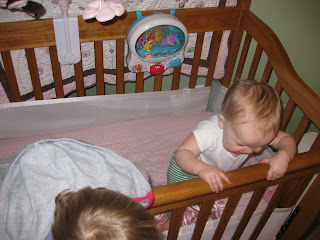 Little stinkers! I guess the crib is only fun for about 5-6 minutes (just like every other activity). Oh well...at least we got one picture!!
Play dates are really so much fun with the girls at this age. They just love being around each other. And even though us mommies were all tired from chasing the girls all morning, it was well worth the LONG naps they all took this afternoon. We realized we need to do this more often, even if it is just to tire the girls out. Haha! Next week...it's party in Addison's crib!
Posted by Jen at 10:44 PM