Growing up, my brothers and I always had a sandbox. We played in it for HOURS and HOURS when the weather was nice. My brothers spent more time in it though, because they were dig-a-holics like Blake. They had every type of truck and tractor under the sun and they played with them until they fell apart.

The sandbox was the place to be.

So I just assumed that when we had kids, we would build them a sandbox right away. But then I started hearing all the sandbox horror stories. Friends telling me how their sand became infested with bugs, how the neighbors cats were using it as their litter box, how the kids were tracking it into the house on their shoes (and in their shoes, and undies, and diapers, etc.)

Um...no thanks. I have enough mess to clean up in the house besides sand.

Eric was completely, 100% against sandboxes for all those reasons and more so when he finally thought he had convinced me not to get one, he was thrilled.

But you see...Blake has become a dig-a-holic and spends HOURS outside playing with his trucks and tractors. And when you don't have a sandbox for all your digging needs, this is what happens. You find the nearest mulch bed and dig the shit out of it. 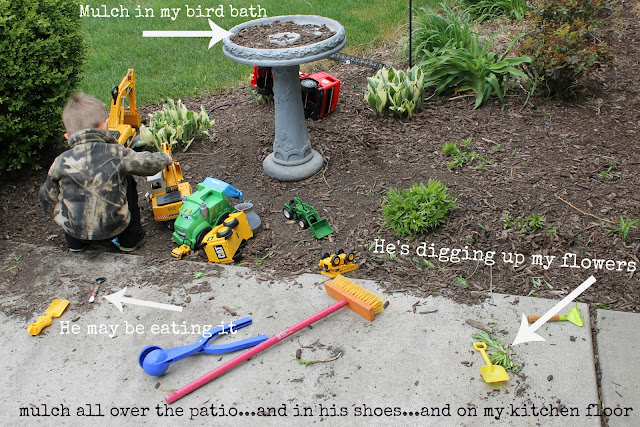 If you can believe it...this isn't even bad! I took this picture a day after I had swept all the mulch back into the bed. Usually you can't even see the patio because it is completely covered.

Eric likes to think the mulch cleans up easier than sand. HA! Mulch is mixed with dirt which turns to MUD when it's wet. I also don't want to talk about how bad that stuff clogs up my Dyson when Blake tracks it through the kitchen.

Mulch sucks. And it is NO substitute for a sandbox.

So I'm in a bit of a situation here. I can see what this summer is going to be like. Mulch and mud ALL over my nice patio (and Blake's shoes, clothes, hands, etc.). Now I am not saying that sand will be mess free, but it has GOT to be less messy than this. Right?

Do any of you own a sandbox? Do you love having it or loathe the day you brought it home? I need advice because if I am going to convince Eric to go for this sandbox, I need some good hard evidence. I am convinced that if we just get a small sandbox that has a lid (to keep out cats. bugs, etc.) it won't cause as many problems. And if it is a box that can be moved around, and not a permanent fixture in our yard, we can take it away if things get out of control.

So come on friends...help a dig-a-holic out. Tell me how I keep this bugger happy all summer. Sandbox or Mulch bed?
Posted by Jen at 7:34 AM