On September 11, 2001...I was sitting in my college apartment drinking a cup of coffee while I went over homework for my 10:00 a.m. Lit class. My mom called shortly after, which was a common occurrence while I was away at school, but something was different that morning. I heard panic in her voice and it scared me. I kept trying to ask her what was going on but she just kept telling me to turn on the TV.

One of the very first images I saw that morning was the plane crashing into the second tower. I thought I was watching an action movie. Was this Armageddon? Where's Ben Affleck? I didn't understand why this was so important this morning...until I saw the captions. All the frantic people running in the streets. The chaos. The smoke. The fear in the reporters voices.

This was really happening.

And as we all know, this wasn't the end of the story. The rest of that day was one heartbreaking scene after another.

I went to my Lit class that morning, although I'm not sure why. We all sat silent, listening to people on their phones. Our professor tried listening to the radio to fill us in on what was happening. Military students arrived in uniform, waiting to be called. And finally, after 20 long minutes, our professor told us to go home and get in touch with our families.

At that moment I remembered my brother was on campus somewhere. I wondered if he knew what was happening? I had to find him.

The rest of that day was a blur. We were all glued to the TV and I spent most of that afternoon on the phone, trying to talk to everyone I loved. I was scared. The world was scared. And I knew nothing would ever be the same again.

The following year, I taught my very first English class. On the one year anniversary of 9/11...I assigned my students a narrative essay. I wanted them to share their feelings from that day and discuss where they were, what they were doing and how the event has changed their life. This became one of my favorite assignments every September because the emotions of that day were so etched in everyones memories. Many of them remembered what they were eating, wearing, who they were with, when they first turned on the TV, etc. Some of them had family in NY. Some of them had family in the military. It was a very emotional experience for everyone and I remember for the first few years...several students (and myself) would still get tears in our eyes talking about it.

But now here we are, 11 years later, and I can no longer assign that narrative. I tried to assign it a couple of years ago and half of my class told me that they couldn't remember that day because they were in 4th grade. And last year, 75% of my class was in 3rd grade at the time and they too couldn't remember any details. Soon, I'll be teaching a class that wasn't even born when 9/11 happened and that is just crazy to me.

I really miss that assignment, especially because I am teaching tonight and I know that most of my class won't remember. They were in second grade...how could they? But I know that the few adults that are in my class will remember forever, just as I do. And hopefully the memories we have can be shared and passed on so that this new generation can fully understand how that day has impacted our country. 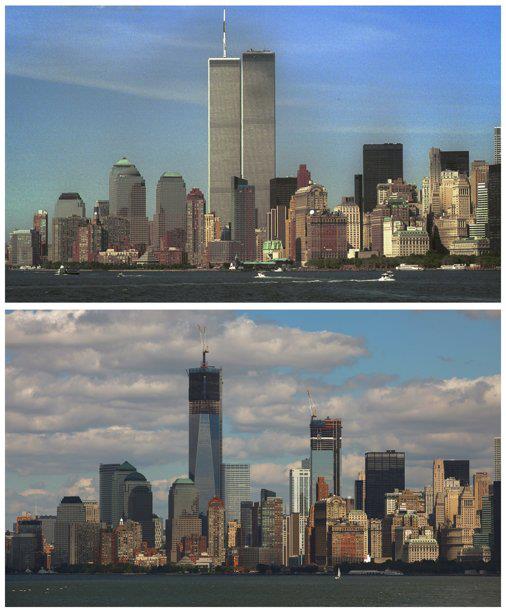