Happy Friday guys!! Welcome back for another week of HEALTH and Fitness Friday! 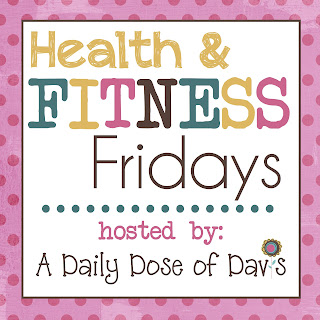 Although, after the week I have had with eating and NOT working out...it's almost a joke that I am hosting a segment on health and fitness :)

In fact lately, I haven't had much to say about fitness because...to put it lightly...I have sucked in that department. But the only thing that was keeping me from feeling guilty was all the extra effort I had been putting in to eating better and cooking more often. And because we have been spending so much time on healthy eating, I thought it was only appropriate to update the name a little :-)

And speaking of eating healthy, up until Thanksgiving...we were doing FANTASTIC in that department. I was even posting pics of my kids eating salads and munching on fruit BY CHOICE!! 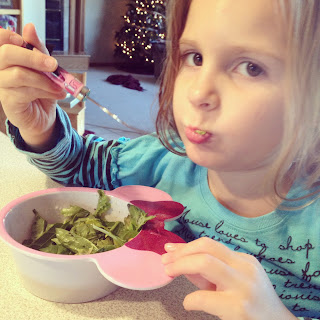 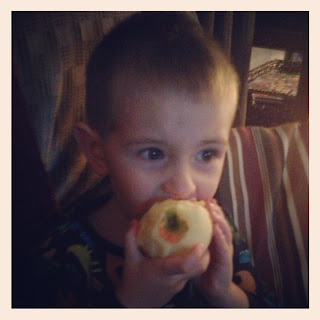 We also kicked our chocolate milk habit, which was HUGE for Blake. He's actually been asking for water, which is just crazy to me. Addie has also been asking for more water, but only because my mom bought them some special big kid cups that she wants to use every day. Hey...whatever works!!

So like I said, we have been making great progress.

BUT THEN...we had Thanksgiving and totally indulged. And then we got sick around here and that broke our new 2-cups-of-milk-a-day rule. So as you can imagine, the last few days have been tough trying to get back into our new routine. It's amazing how much easier it is to say no to the snacks when the bad stuff simply isn't in the house anymore. There is no way I can give in if we don't have fruit snacks or cookies or chocolate milk. So I suppose that will be the plan again...continue to fill our snack try with tons of yummy HEALTHY treats... 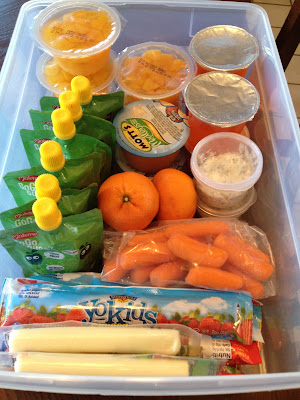 And hopefully we will be back on track again. I mean...at least until all the Christmas cookies and parties start happening. Then it will be back to the drawing board once again. Ha!

But who can blame them?!! I have been JUST as bad with breaking the rules and eating all the yummy treats I am not supposed to have. And let's not even talk about how many days it has been since I worked out. I am embarrassed to admit it.

But I will say that everything is going to get back on track after my 5K this weekend. My Dad and I are running the Santa Hustle in Chicago and it is going to be a BLAST!!!! I have no idea how I am going to run in a santa hat AND beard... 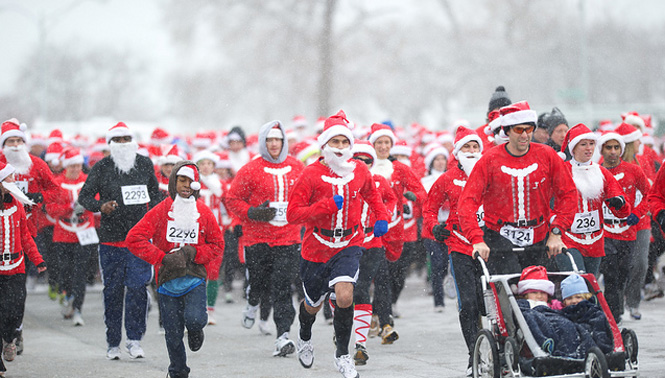 But I am going to give it my best effort. Did I mention they serve milk and cookies at the end of this race? Nom nom.

So after I run this weekend, I am hoping it will give me the kick in the pants i need to start logging some miles again. I said I wouldn't fall off the wagon this winter and I NEED to get back at it before I am too far gone. Know what I mean?

So has anyone else found it really hard to stick to all your health and fitness plans this time of year? What are your strategies to keep from being a lazy fatty this holiday season? Because to be honest...I am tired of talking about wanting to get "back on track" every week without actually doing it.
Posted by Jen at 12:00 AM