You Know What's Scarier Than the Dentist?

But that's where I had to take both kids today for their cleanings.

Now, I shouldn't say the Dentist is scary for both my kids. Addie is easy peasy when it comes to the Dentist. Always has been...even for her very first cleaning when she turned 3. 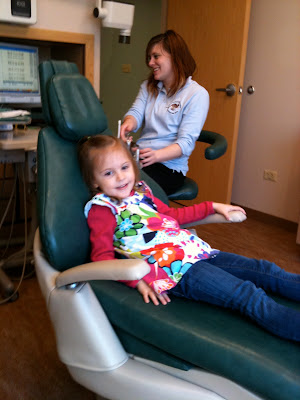 She hopped right up in that chair and said, "Ahhhhhhh!" I was so proud of her and SO RELIEVED that she wasn't scared of the Dentist like I was as a kid (and adult).

And she still isn't scared. Even today she hopped right up in the chair and asked for her sunglasses. She's a pro.

Now Blake on the other hand...he does NOT share Addie's love of the Dentist.

Not even a little a bit. I took him for his first cleaning at 2 1/2 years old and it was a nightmare. Limbs flailing, bloodcurdling screams and I got kicked in the face at least twice.

So as you can imagine, I was less than excited to take the kids back to their appointment today. SO many parents told me how their child's first experience was horrific but their second experience was a breeze. I PRAYED this would be the case for Blake.

Now, if you saw this picture on Instagram today, you may have been convinced that this boy of mine did awesome. 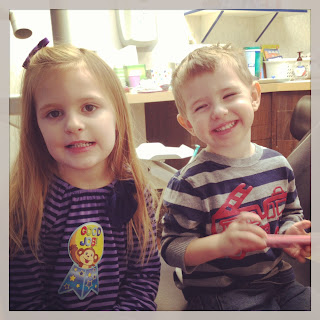 I mean...just look at that face. So sweet and fun-loving. He probably gave the Dentist a big old hug and kiss when we walked in, right?

There was no hugging or kissing. In fact, I am pretty sure Blake told the hygienist that he didn't like her. She took it like a champ though and said she's heard much worse. I believe it.

And even though Blake wouldn't kiss the hygienist, I almost did. She was SO PATIENT and SO SWEET the whole time Blake was shouting and kicking me in the boob. I kept apologizing for his behavior and again...she told me she had seen much worse from his age. Not sure I believed that one.

But as soon as she was finished, Blake sat up, wiped his tears, gave me the finger, and then SMILED at the hygienist. He looked at the movie she had playing (it was "The Reef") and he said, "Look at that silly shark! Isn't he so silly?"

The two of them had a 10 minute conversation about sharks, Lightening McQueen and stickers. He THANKED HER for brushing his teeth and gave her a freaking hug when she handed him his new tooth brush. Then I snapped this picture so it's the only thing I will remember from this appointment.

I can't say that Blake will ever learn to love the Dentist like Addie. I know I never did and I am 32-years-old. But if we can at least leave smiling every time and be appreciative of a sticker and new tooth brush, I guess that's all I can ask for. That, and NO CAVITIES!! Woohoo!

So we survived the Dentist today and you know what that means...it's wine time for mama!!
Posted by Jen at 4:41 PM