When I say that I have spent the last year worried sick about Blake's first day of preschool...it's no exaggeration. This probably comes as no surprise to anyone who knows me, considering I've talked about it countless times, but for those of you that don't know my little guy...let's just say he takes the phrase "Stage 5 Clinger" to a whole new level. He loves his mama and isn't afraid to let people know when he doesn't want their company. His favorite phrases are:

and my all time favorite...

Blake can be the sweetest, funniest, most lovable little guy on the planet, but when he is shy/embarrassed/scared/tired he only wants his mama and there is NO SUBSTITUTE. For a year I have tried to break this little guy out of his shell and after many failed attempts, I finally got Blake into a class he loved. He has been taking an independent storytime class at the library with his sister and some of his cousins and he has just blown me away. He listens to the stories, he puts his mat away, he does his craft and spends the entire 45 minutes without me. This was such a HUGE milestone for us this summer and I think it is the one thing that gave us both the confidence we needed.

But I was still worried. I mean, 45 minutes with his sister and friends is one thing, but 2.5 hours with new teachers, new kids AND a new school? That was a big deal. So naturally, I haven't slept for the last week thinking about his first day of preschool. I figured he would cry, but would I have to pry his hands off my car door? Would I have to hear his cries all the way in the parking lot? Would his teachers be calling me to come back and get him? I was a wreck.

But then the big day came yesterday and when this little dude woke up with a big smile on his face...I couldn't help but smile too :-)

He was so proud to hold his little sign and he even made me take a video of him explaining that he wants to be a "Race car driver" when he grows up.

I wanted 20 more pictures of him, just like I had with Addie on her first day, but after this one picture and the video, he said he was "All done!" And I didn't want to push it :-)

On the way to drop Addie off at school, Blake was talking about his new book bag and which hook was his in the hallway. When Addie hopped out she yelled, "Have fun at school Blakey Boy!" and he said "I will!!"

And that was that. We were on our way.

At Meet the Teacher last week, they told us that we had the option to either walk the kids in on their first day, or get in the drop off line right from the start so that the kids could get adjusted. Because Blake remembers the process of Addie's teachers coming out to get her, I felt like this was the best plan for us. I was afraid that if I walked him in, he wouldn't want me to leave and that would just be so much harder. So I got in the drop off line with a bunch of other parents and waited for our turn.

I wanted to puke the WHOLE TIME and just kept looking at Blake to see if he was still smiling. And he was.

When his teacher came to the car to get him, he didn't even hesitate. He reached for her, smiled for one last picture, and then turned and went into the building. He only looked back once to remind me that I owed him a new dinosaur when he has a good day :-) 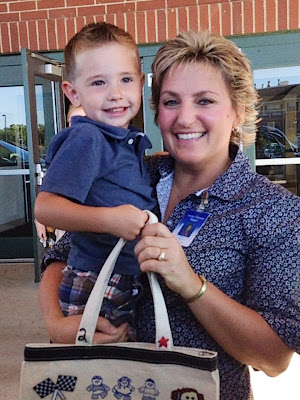 The next 2.5 hours went by in flash. I just walked aimlessly around Target with Pumpkin Spice Latte and got tears in my eyes every time I walked by the baby section. Or the toy section. Or any section that made me think of my little dude. I just wanted him to have the best day ever.

I was 20 minutes early in the pick-up line because I couldn't take it anymore. I wanted to be the first car so that I wouldn't have to wait one second longer to see him. At 11:15 on the dot, I saw all the kiddies come to the front doors and line up. I could see my buddy with his little rooster hat on and I couldn't believe that he was actually WEARING IT!!! And he was smiling!! And waiting patiently in line. And when they called his name to come to my car, he raised his hand and walked to his teacher.

This sight right here made me cry again.

Words cannot express how proud I was at this moment and how RELIEVED I was that he did so well. Not a single tear and the teacher told me that he had "a great first day."

I realize that not every day will be this easy and there's a good chance that at some point, he will tell his teacher not to "say things to him". But instead of worrying about the future, I am going to try really hard to just celebrate this moment and be excited for my big boy...who is now TWO dinosaurs richer :)