Over here at A Weekly-if-You're-Lucky Dose of Davis, we've been pretty damn busy stuffing our faces, enjoying our fabulous families, living out our glory days and pretending like we are serious athletes. So let's do a little recap, shall we?

The last two weeks have been a total blur. It all started with a night of turkey cookie making… 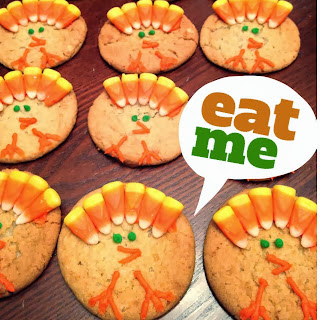 You see, my little dude had his VERY FIRST Thanksgiving Feast at preschool and we were both pretty excited about it. We were assigned "cookies" for our contribution to the feast and I wanted to make something extra special for him to bring. 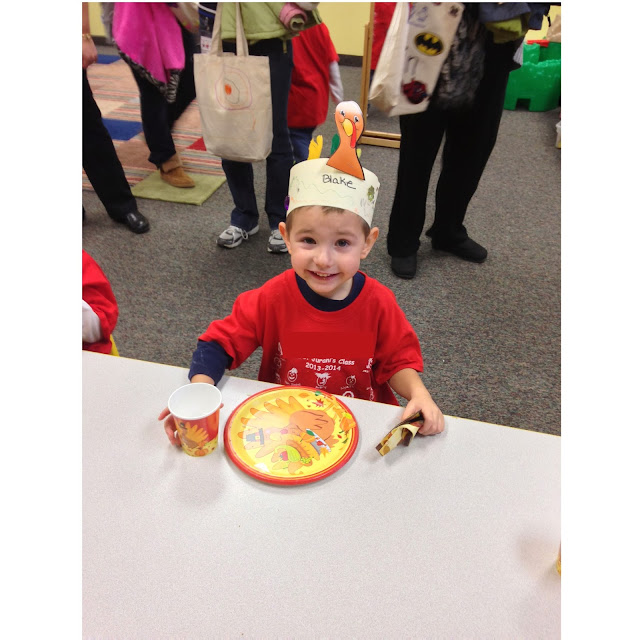 Couldn't you just gobble him up?!!

Addie had her very own Thanksgiving Feast at school, which consisted of School Nurse Approved popcorn. BOR-ING! But the kindergartners thought it was the best day ever and she made me an adorable handprint turkey (that I will cherish forever :-)

The weekend before Thanksgiving, we celebrated with Eric's family. It's amazing how much this couch full of kiddies has grown. 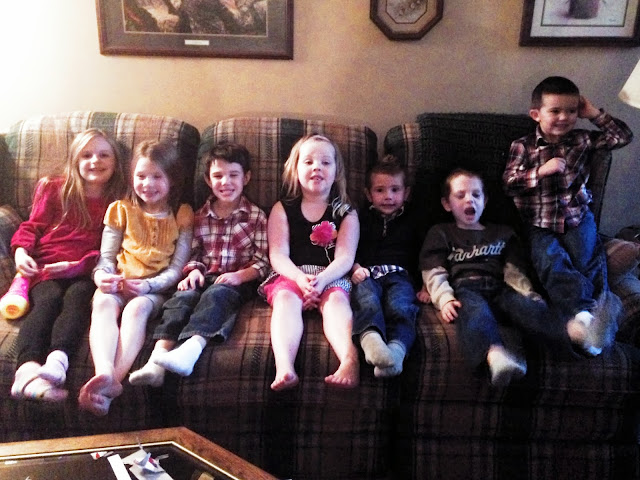 I know I say it every year, but I really married into the best family ever. 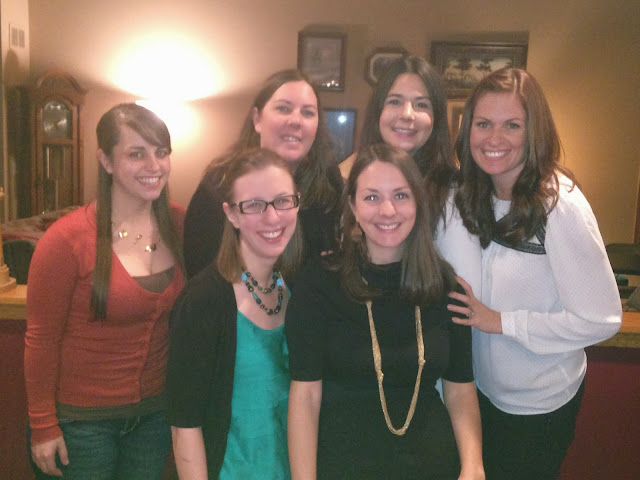 Our holidays are always full of laughs and LOTS of delicious food. 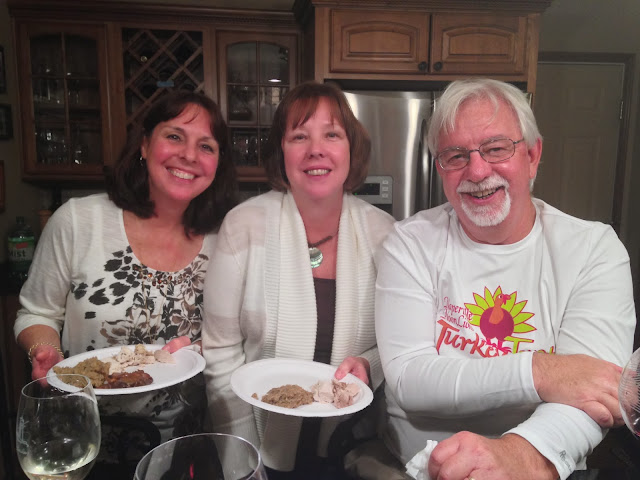 Later that week, Eric and I hosted Turkey Day for my family. I made sure to stock up on the essentials. 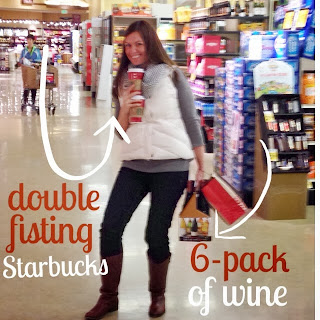 As always, Eric and I cooked two birds. This year we smoked one… 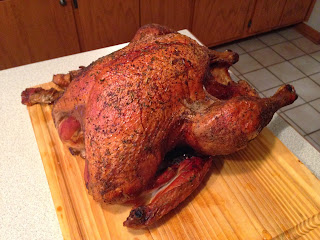 And roasted the other. 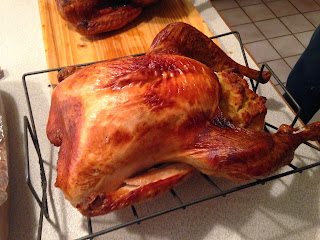 Even though I hate to admit it, the smoked turkey was the best. Damn it! 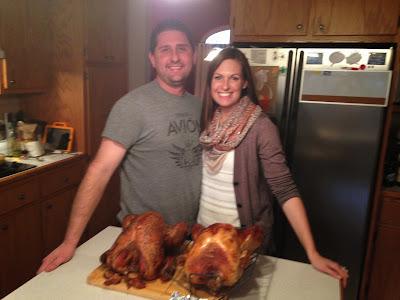 We really had an awesome feast this year and the best part was that the whole family could be there to enjoy it together :-) 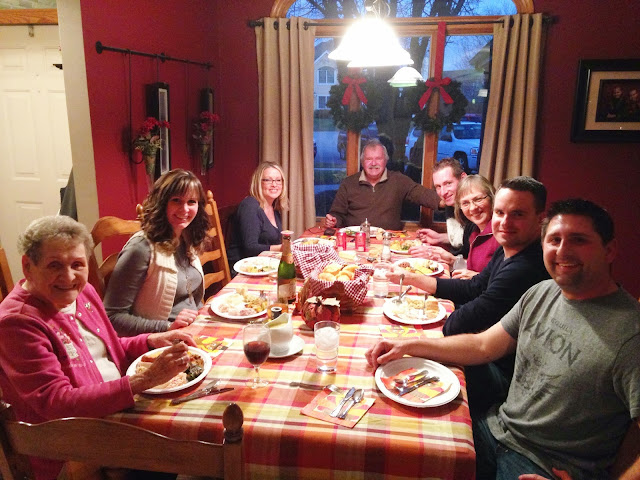 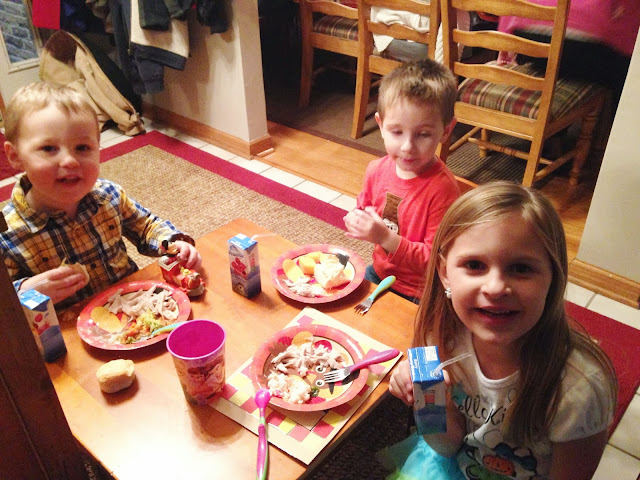 By this point in the week, Eric and I were pooped. We talked about how great it would be to spend the weekend laying around and playing with the kids. But that's just not how we roll!!!

So the day after Turkey Day, I prepared for the Alumni Football game that I have been helping coordinate for the last 9 months. It's just been myself and 4 other volunteers and we've been busting our butts trying to make this game happen. There were many times over the last few months that we were worried we wouldn't have a team to play, that we wouldn't be able to play on our high school field and then our biggest worry…that we wouldn't have anyone show up to the game!

But we prepared anyway and by the time Friday night rolled around, I was channeling my inner 18-year-old. 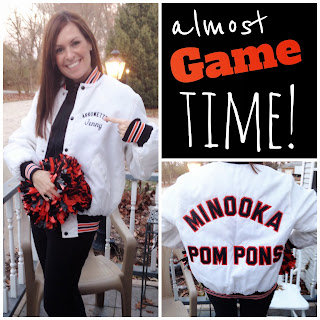 By the time the lights came on the field, fans were already waiting in line for tickets. 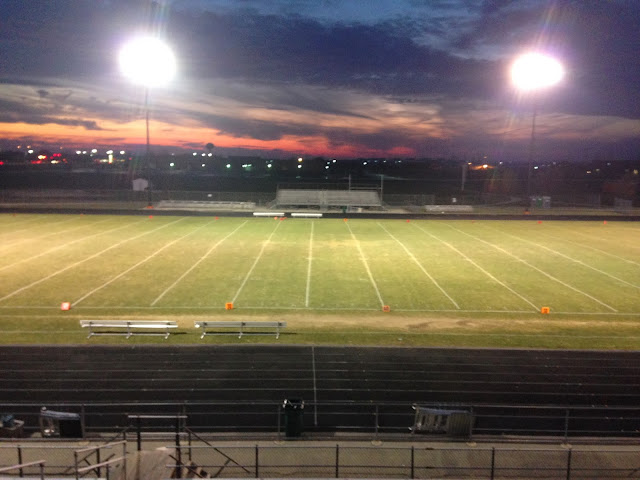 I can't remember the last time I was that excited for a football game, and I think the rest of the alumni felt the same way. Our Black Friday Night Lights game had two full alumni football teams, including our high school rivals, a full alumni cheerleading squad, alumni dance team (holla!!), alumni choir, band AND color guard.

I guess the idea of seeing a bunch of middle-age men play tackle football in full pads was enough to bring out the crowds, even in 28 degree weather, because the stands were FILLED!!!! We couldn't have been happier, especially since the purpose of this game was to fundraise not only for our high school, but also for some other local charities in our community.

The game was a smashing success and the press we are receiving has been wonderful.

And because I am SO PROUD of our halftime performance, I will actually show you a little video that Eric took. He got the Cheerleaders doing their halftime cheer too :-)

The Magic 6 that made the whole game happen :-)

When I got home from the game that night, I was frozen and sore in places I didn't know existed. But there was no time to rest because Eric and I, like a couple of jackasses, decided to sign up for a 5K on Saturday!!

I really don't know what I was thinking signing up for a race the day after my alumni game, but when Eric said he wanted to run it with me, I jumped at the chance! This was his first race!!! So Tara and Tommers had to join in on the fun too.

We arrived at the Ditka Dash bright and early and got some awesome pics in our mustaches and aviator sunglasses :-) 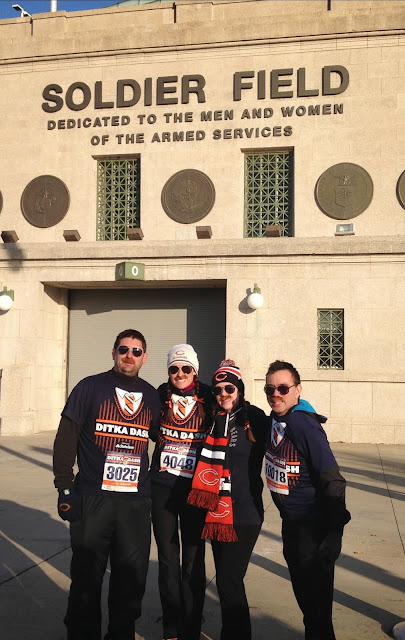 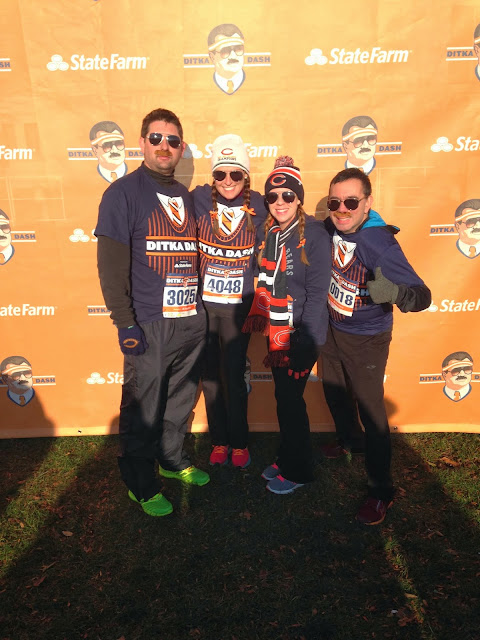 Tara and I with our matching braids :-) 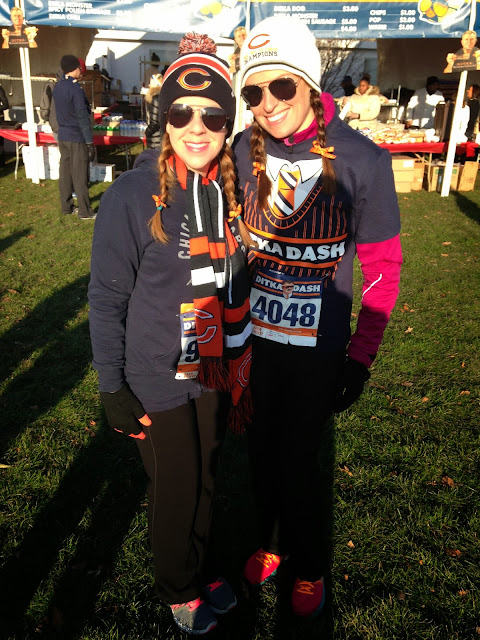 I don't know who pulled off the stache better…Eric? 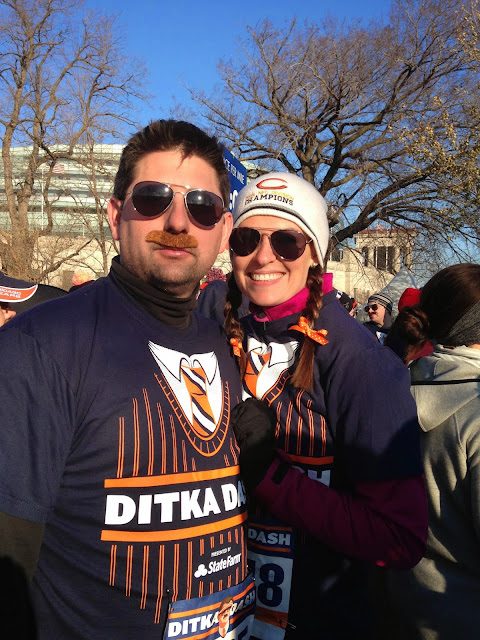 Or Da Couch himself!!! 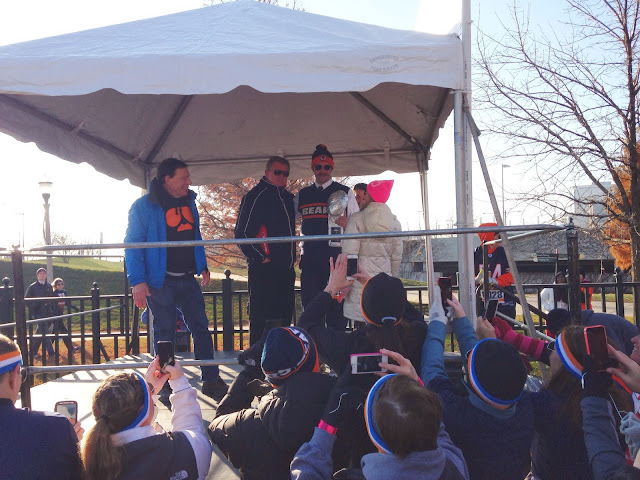 All I can say is that the race was freaking awesome. We ran my favorite Lakefront path... 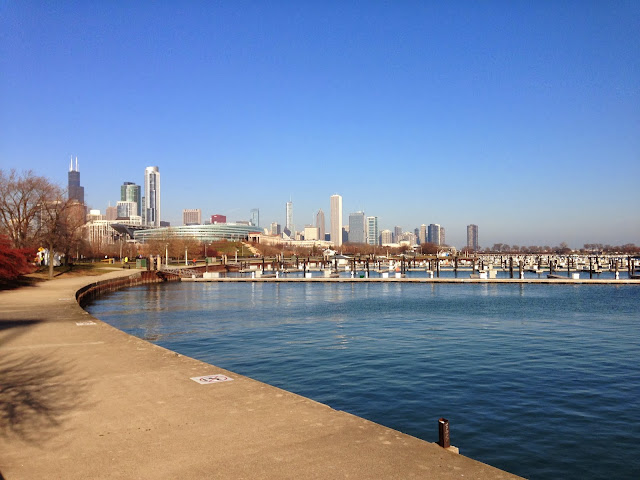 And of course we goofed off the whole way and didn't take a single mile seriously…. 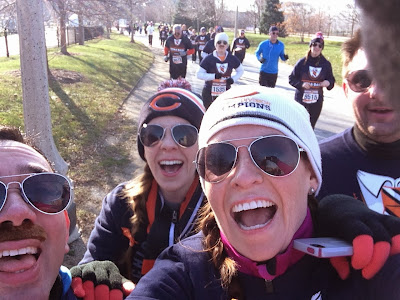 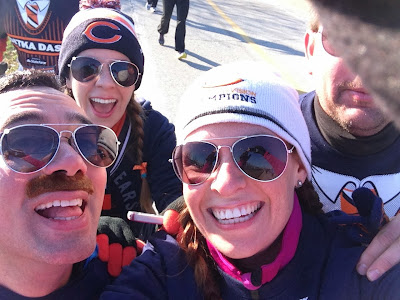 And then when we finally made it to Da Finish... 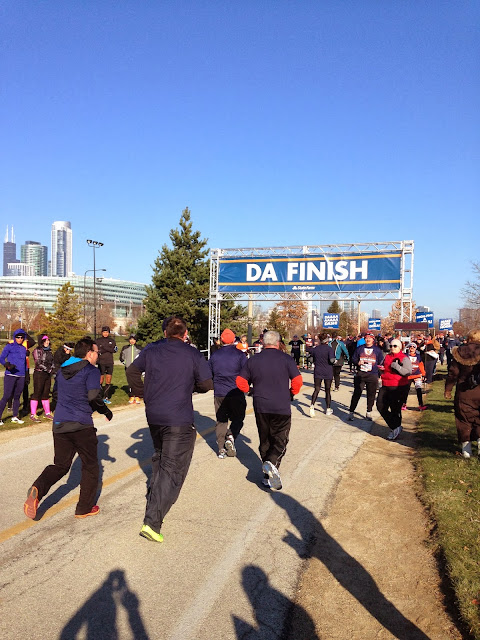 We raced straight for the beers... 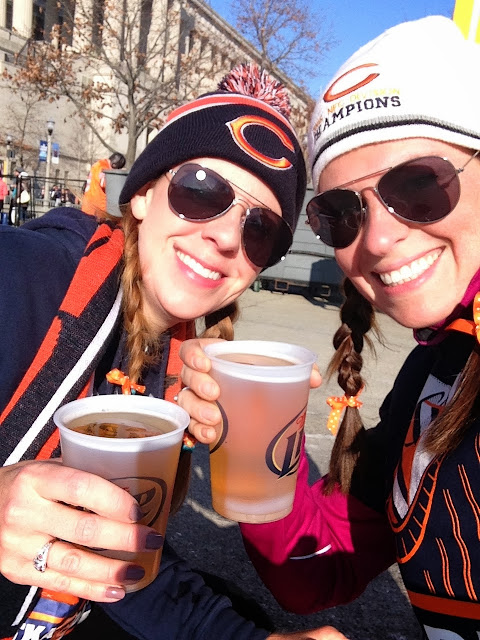 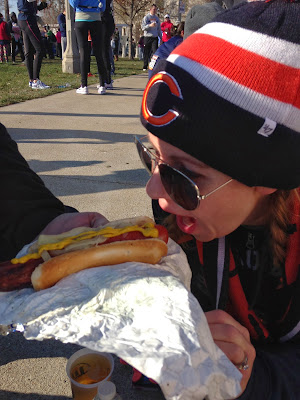 Have I ever mentioned how much I LOVE running with Tara and Tommers?? I don't think Eric really loved the race, but he loved hanging with my homies. I think we may have recruited another one to the run club :-)

I wish I could say that our marathon of fun stopped after the Ditka Dash, but a certain fella had a birthday to celebrate. 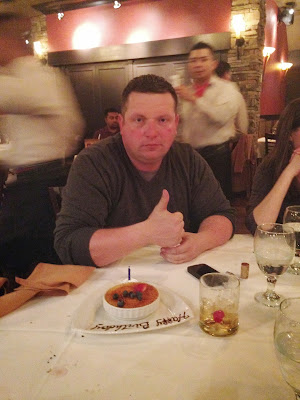 ANYWAY, the rest of this week has been a lot of catch-up for us. It was a hard transition going back to school and getting in the groove, but now that it's almost Friday, we can FINALLY RELAX!!!