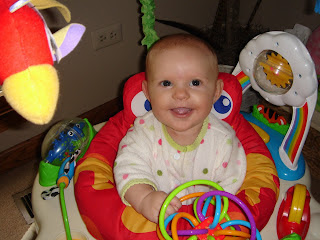 The other day, I decided to put Addison in her swing to take a nap. She hadn't been in it in a while so I thought I would give it some use. I put her in, covered her with a blanket, turned the dial to the second level and walked to the kitchen to do the dishes. While I was in there, I heard this creaking noise...like the swing was caught on something. So I peaked in at her and realized the swing was barely swinging. I checked to make sure it wasn't caught on anything, which it wasn't, so I stood there for a second trying to think of what to do. And of course, because there wasn't enough motion, Addie woke up. So I took her out of the swing and watched as it finally started to move. WTF? So I put her back in to see if it would keep working but the same thing happened. I realized at that moment that she was just too big! The swing couldn't keep her 15 pound, 4 ounce butt moving fast enough. So...the swing is out. I washed the cover and packed up yet another baby item that only got 3 months use :-(
But the good new is...we get to use a new toy! To replace the swing, I put up Addie's Rain Forrest Jumperoo. I wasn't sure if she would like it, but as you can see form the picture...SHE LOVED IT! She is just now learning how to push off her legs to make the seat bounce and once she gets going, she gets the biggest smile on her face! Yay! My little meatloaf is turning into such a big girl!
Posted by Jen at 10:23 AM