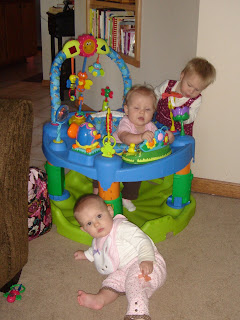 My cousin-in-law Maggie gave birth to a beautiful baby boy last night. It was a little late for anyone to go visit so today, my sister-in-law Dana and other cousin-in-law Katie both called me for babysitting duty. I couldn't say no, since the two of them were so excited to get to the hospital. So around 11:00, two SUVs pulled in my driveway. I watched them unload the girls as I held Addison and thought to myself "what the hell am I doing? I am going to watch two 6-month-olds and a 12-month-old at the same time!" It was a little late to go back on my offer so I just smiled and welcomed everyone to Davis Daycare. I only watched the girls for an hour and a half but let me tell you what...I have a new found respect for all mothers of twins and triplets. Actually, I have a new found respect for all mothers of 3 or more. How my Grandma survived having 13 children I will never know.
But aside from only two minor crying spells, the girls were wonderful! I corralled them in my family room by blocking the entrance with the exersaucer. Nia is the only one that can walk but since Addie and Audrey are rolling and crawling all over the place, I wanted to keep them all where I could see them. Nia is my little Houdini though and she managed to escape several times. I caught her in the act (see pic above). She managed to squeeze between the exersaucer and the wall. She is a smart little cookie :-) I have to say that even though I was dog tired when the girls left, I had a pretty great time watching them interact with each other. Addie and Audrey just rolled around on the floor together playing with each other's hair (okay...Addie played with Audrey's hair and Audrey just patted Addie's peach fuzz) but it was still cute. And Nia was my little helper. Whenever one of the girls would drop a toy, Nia would pick it up and hand it to them. When Addie stole Nia's paci, Nia took it back, stuck it in her mouth, and then gave it back to Addison. I guess she just wanted to test it out for her :-) I was so happy to see how much the girls enjoyed being around each other. Its going to be so much fun watching them grow. But if I am going to watch all three of them again, I am going to need to install a room gate and drink a very large can of Red Bull.
Posted by Jen at 6:26 PM