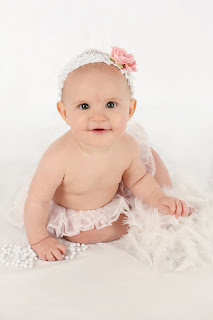 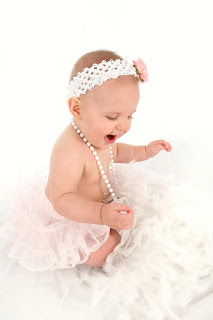 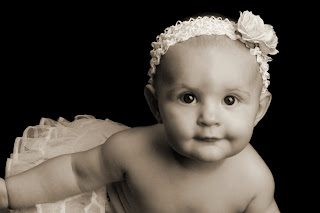 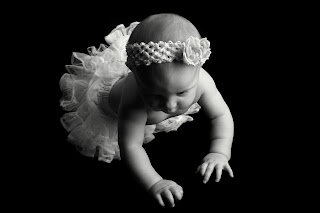 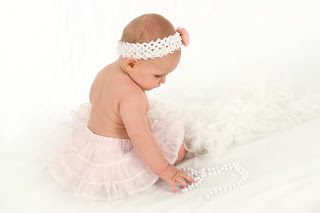 Since Uncle Ryan has been busy traveling and because I had a giftcard burning a hole in my pocket, I decided to take Addie to Jill's Portrait Studio in Naperville for her 6-month pictures. I was a little worried that the pictures weren't going to turn out. For one thing, Addie was a little fussy in the car on the way to the studio that day. Never a good sign. And on top of that, it was raining cats and dogs and I wasn't sure how I was going to get her, a diaper bag, 3 outfit changes, my purse AND Eric all into the studio without something or someone getting soaked. Eric ended up taking one for the team and dropped us off at the door. Luckily we were all dry and presentable for the pictures (thanks to the fabulous changing room they had there). It was perfect and Addison ended up being in a great mood once she got out of her carseat. We snapped a few family shots, which turned out great, but my FAVORITE shots are of her in her little tutu. She makes the cutest little ballerina :-) Jill's studio did a fantastic job and even though I would love to post every single picture they took, I thought I would just include a few of my favorites for now. I am sure I will have more to come later...especially when Uncle Ryan gets home and wants to show them up with some shots of his own :-) Enjoy!
Posted by Jen at 5:43 PM