Adding Addie to Our Family Tree

Okay...so now you all know the story of how Eric and I found out we were expecting Addie. Since I had so much fun telling that story, I have decided to keep the memories coming. So, lets start where we left off...
After the initial excitement of telling your friends and family the big news starts to wear off, you realize that the first few months of pregnancy are not as fun as you expected. For one thing, you are the most tired you have ever been in your life and then when you realize that even the taste of pizza makes you want to barf....you know you've got problems. I slept A LOT the first 3 months of my pregnancy. And when I wasn't sleeping or dry heaving, I was reading baby books. I am sure you all remember my very first post, but to refresh your memory, I had to pack all of my baby books away mid way through my pregnancy because I was giving myself panic attacks and I was calling my OB non stop. I know...I am making pregnancy sound like SO much fun. But seriously, once you are past the sick and tired stage and your belly starts to look more like an actual baby bump instead of just a spare tire...you are in the clear. That, in my opinion, is where the real fun begins.
Once you have told all of your friends and family the big news, the next exciting event during pregnancy is finding out the sex of your baby. I have known a few friends who decided to wait and let the sex of the baby be a surprise and to them I say "Bravo!" But there was no way in HELL I was going to be able to wait. In fact, I couldn't even wait until my 20 week ultrasound! I was checking Chinese gender charts and trying out all of the old wives tales but those still didn't satisfy me because one test would say boy and the next would say girl. So...I did a little looking around online and I came across an ad for this gender test called IntelliGender. All you do is pee in a cup and mix it around with some secret concoction and then the color identifies if you are carrying a boy or girl. I knew this was pretty silly but for $20...I figured it was worth the fun. After only two days of anxiously waiting my mailbox, they arrived. 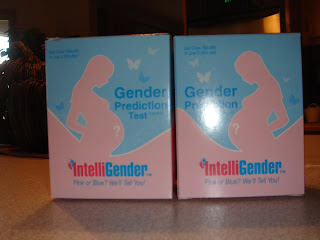 Eric told me I was nuts at first but when the first test said BOY he was like "Take the other one! Take the other one!" Well wouldn't you know...the other one said GIRL! I know this was all just for fun, but I decided to call the company anyway to complain about my mixed results. I figured the least the tests could do was tell me the same gender...even if it was wrong. So, they sent me two new tests and I took them as soon as they came in. Here were the results... 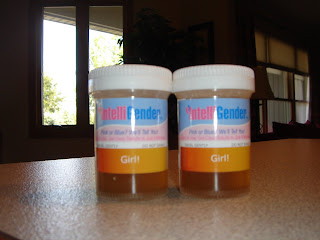 The tests were both SO obviously girl, but Eric insisted that it was still a boy because that is what the very first test said. At this point I didn't have a ton of faith in the predictions anyway so I let Eric go on thinking the other 3 tests were just a fluke :-)
Over the next few weeks, everyone else gave us their predictions. It was running about 75% Boy and 25% Girl. I was carrying very high and round and because there was a sudden boom of girls in our family, everyone thought I would have the boy. Deep down I still had a feeling that Addie was a girl, but I sort of let everyone convince me otherwise. Plus, I have always pictured myself having all boys. I am not sure why, but that is always what I imagined. So by the week of our ultrasound, I was on the boy bandwagon. I even picked out some adorable race car bedding at Pottery Barn Kids that I was going to buy after we knew for sure.
Actually, can you ever really know for sure until you are holding the baby in your arms? You always here all these stories about people who were told their baby was one sex and they came out another. I was a little worried about jumping the gun too but that wasn't going to stop me from finding out. It was all I could think about for crying out loud! But, when the ultrasound tech showed Eric and I the first glimpse of our baby on the screen, our hearts melted. We saw her little beating heart and at that moment...I completely forgot we were going to find out the sex. I didn't even care at that point. My baby was healthy and active and that was all that mattered. But then when the doctor said "so...do you wanna know the sex?" I couldn't yell "YES!!" fast enough. Turns out I was right all along. We were having a girl. 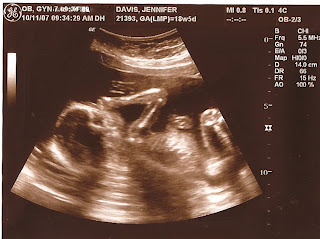 For about 3 hours, Eric and I were the only ones who knew that Addie was a girl. It was my birthday and we decided to invite our families over for cake so that we could tell them the news all together. "Baby" was the theme of my birthday that year, if you couldn't tell by the cake my mom got me :-) 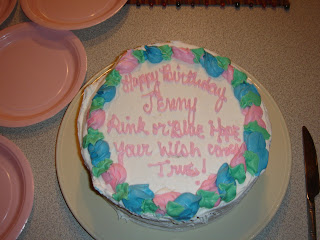 And my wish had come true! We were pregnant with a healthy baby girl and we couldn't WAIT to tell everyone. Eric and I really wanted to do something special for the big reveal and we came up with the idea of putting together a family tree. We listed our parents, siblings, spouses AND pets. We were just going to set the poster out for everyone to look at when they came in and see who could spot Addie's name first. But then Eric came up with the idea of putting a big question mark over Addie's name so that we could pull it off together in front of everyone. This ended up being SO much fun. Everyone was putting in their last minute guesses and they ALL said boy, except for my father-in-law. He changed to girl at the last minute. So, you can imagine the surprise on everyone's faces when we pulled off that question mark and revealed, for the first time, that Addison Lynn was on her way. 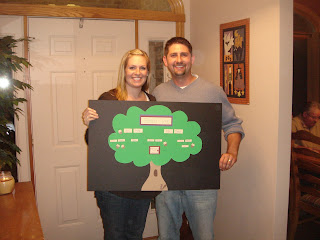 I actually just hung this family tree in Addie's playroom because I think it will be a great story to tell her one day :-) 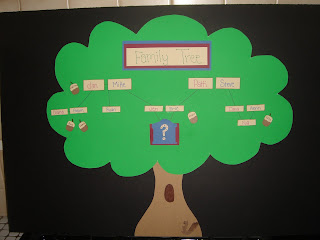 Well we are just moving right along aren't we? We know that Addie is a girl and I only have another 20 weeks of pregnancy and 16 hours of labor to catch up up on! Good thing I have a few days left :-)
Posted by Jen at 7:00 AM