Starting From the Beginning

If you look back at the archives on this blog, you will see that there were 2 posts in 2007. They were ultrasound videos of Addie moving around in my belly. I was planning on documenting the rest of my pregnancy but because I was too busy nesting and playing in her nursery...I never logged back on to update anyone. I also never posted about her birth or the first 3 months of her life. I guess I was too busy feeding and not sleeping :-) But now that all of you know so much about Addison from 3-months and on...I thought it might be fun to go back and do a little pre-Addie updating in celebration of her birthday. So, for the next 5 days, I will do my best to bring you all up to speed (I promise that this recap will be more exciting than my Ghost Whisperer post. Ha!) So...I guess there is no better place to start than from the very beginning.
Making the decision to start trying for a baby is probably one of the most exciting moments in a couple's life. I can still remember the day that I came home and told Eric I was ready for a baby. You see, he had been waiting a while for me to make this decision. Eric was ready for a baby the day we said "I Do." Well actually, Eric was ready long before that. In fact, he even asked me once if I wanted to hold off on the wedding and have a baby first. He was serious too. And even though I wasn't ready quite as soon as he was, it didn't take long for my baby fever to kick in. For one thing, there were pregnant bellies popping up all over the place and that was very hard to resist. Also, as I was walking through Babies R Us looking for shower gifts, I would catch myself daydreaming about being pregnant and getting read for my own baby. And then, after a trip to Baby Gap on my lunch hour one day, it hit me. I was ready. So I raced home from work to tell Eric and he didn't want to waste any time getting started. Ha!
It's funny though...you think that once you decide to get pregnant, it will happen right away. Like POOF! your with child. But that isn't always the case for a lot of people. And it wasn't the case for us. It didn't take long, but it certainly didn't happen right away. I was already to the point of researching the Internet and diagnosing myself with fertility problems (remember...I wasn't banned from WebMD at this point). Everyone told me to be patient and God would bless us with our miracle. And you know what....they were right! We had made the decision to start trying in the spring and by summer, our wish had come true.
Now remember, I was busy diagnosing myself with all kinds of fertility problems (even though it had only been a couple of months) so at this point, I was very in tune with my body. I was tracking and charting every last thing so I knew exactly when the first day was that I could take a pregnancy test. I had a dream that night that I was pregnant and I woke up at about 2:00 in the morning. I ran in the bathroom, took a test, waited two minutes and then looked at the results. Negative. Damn!! I didn't dwell on the result because it was 2:00 in the morning and I was beat. So I put the test on the counter and went back to sleep. A few hours later I woke up for work and went into the bathroom to get ready. I looked back down at the test on the counter and I could make out a VERY faint second line!! Was I seeing things? Was I just wishful thinking? I was about to jump on the computer and google "pregnancy hallucinations" but instead, I ran into the bedroom to show Eric. He was still half asleep but as soon as I said "positive pregnancy test" he sprung right up. After examining the test for a good 20 minutes, Eric decided he needed more proof. He said I should go to the store and buy a few more brands of tests and take them again when I get home from work. So that's what I did...I went to Walgreens on my lunch hour and stocked up. It was a LONG day at work waiting to get home to take the tests. But finally...the time had come and the results were in... 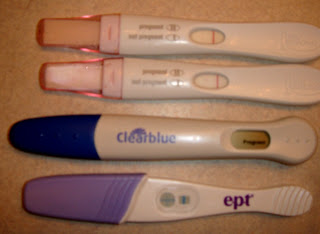 I WAS PREGNANT! The top two tests look negative because the second lines were so faint. But I assure you...they were there! The digital test was more obvious with the big "Pregnant" flashing on the screen. That is the one I used to show Eric. When he got home from work that day, I came to him and said "babe...I bought this digital test but I can't tell what it says." So I handed it to him and he said...very nonchalantly..."it says pregnant." I watched as he slowly made the connection...yes...I am pregnant!! We both screamed and then he high fived me. Hahaha! Leave it to Eric to high five at a moment like that. Don't worry...the high five was followed by a big hug and kiss. We were going to have a baby!! I was already thinking of my scarpbook so we ran and grabbed our camera to take my very first belly pic. 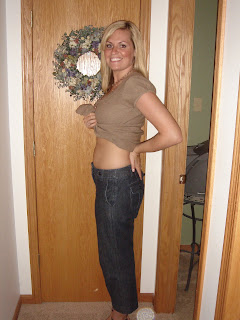 Oh how I would LOVE to have this stomach back. Oh well...Addie was SOOOOO worth my muffin top :-) So there you have it...now you are up to speed on the day Eric and I found out Addie was on her way. There are lots of fun memories to come so stay tuned :-)
Posted by Jen at 7:28 AM