As planned, Eric and I finally celebrated our anniversary this weekend and our night out was spectacular. For starters, we had the most beautiful Fall-like weather yet and I was able to wear one of my cute new scarves (my new accessory obsession). I know that isn't big news...but I was excited :-)
Then, we had the most delicious meal at Morton's The Steakhouse.

When I called to make our reservation a week ago, the Hostess at Morton's asked if we were celebrating anything special. I told them it was our anniversary and they said congrats. Well, when we got to the restaurant, EVERYONE knew it was our anniversary so the host and our waiter made it a point to wish us a happy night. Then, they brought us our keepsake menus that had "Happy Anniversary Jen & Eric" printed on them. Very cute idea. They also took our picture, printed it, and gave it to us in a frame. I thought that was a very nice touch too :-) I know it was no big deal and they probably did that for every table dining with them...but nonetheless...it made the night extra special.
As far as food goes, I have no complaints. I won't lie...the place is kind of pricey. BUT...the food was absolutely phenomenal and the portions were very generous (not always the case at upscale restaurants). Our glasses were never empty and we never had to look for our waiter once. She was always there asking if we wanted or needed anything. The service was perfect, as was our food, so I would highly recommend going to a Morton's Steakhouse for your next big event...or even just a night out :-)
And speaking of our night out, we also made it to a movie! Woohoo! The original plan was to see The Hangover, but sadly the show time was a little later than we realized and we didn't feel like killing another two hours. So, we decided to see The Ugly Truth. 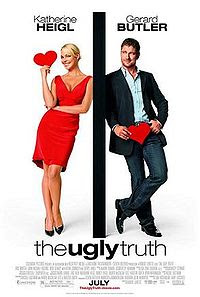 When previews for this movie came out, I really wanted to see it . I love Katherine Heigl and Gerard Butler and the plot for the movie seemed pretty funny. And it was. There were many funny parts to the movie. However, I thought it was just a bit too raunchy. Don't get me wrong...I am not offended by swearing and sexual content. But this was set up as a "romantic comedy" and because of all the heavy sex jokes...I lost that whole romantic feel. I wasn't rooting for Abby and Mike to get together. I was too focused on the fact that Abby wore vibrating panties to dinner and the fact that they said the "C" word 15 times in 2 minutes. In my opinion, the writers/directors spent waaaaay too much time and effort making Mike seem like a dirty, sexist pig that when it came time to make him look like a good guy...I didn't buy it. But then again, this is just my opinion. Perhaps I set my hopes to high because I was a little let down by this movie. And because of it, I STILL HAVEN'T SEEN THE HANGOVER!! I suppose at this point, Eric and I will just wait for it to come out on video :-)
Anyway, that was a little review of our fun night out. Peanut did great at Grandma and Grandpa's and was spoiled with McDonald's and ice cream. She so did not want to come home :) I hope you all had a nice weekend too!
Posted by Jen at 7:43 PM