I realize I am almost 2 weeks late in posting this, but I was waiting to get Blake's 18 month pictures so I could do a little comparison. Isn't it amazing how much babies grow every 6 months? 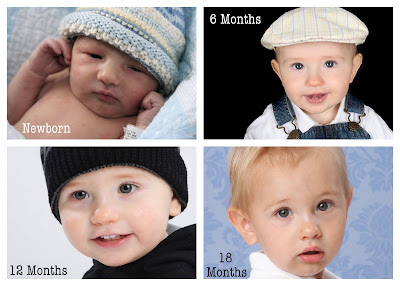 Blake has changed SO much since his first birthday. Some of these changes are wonderful...and some not-so-much. For example, Blake has discovered his independence. I remember this being the age where Addie stopped wanting to be in her carseat, stroller, shopping cart, etc. but because 18-month-olds simply don't have the listening skills they need to have this independence, I find myself literally chasing Blake every where we go. He is incredibly bullheaded and if you try to restrain him when he doesn't want to be...look out!! He is also still a bit of crier and a clinger when he is put in unfamiliar situations. But if you offer Blake your hand to give you a high five, he will eventually come around. It's his thing :-)
And honestly...as hard as this age is sometimes...there are few things more special than hearing your baby talk and interact with you for the first time. Blake isn't saying a ton of words, but he is saying enough for me to know that he is learning something new every day. He also understands everything I say, even if he can't respond with words. If I tell him to go get his shoes, he goes and gets them. If I ask him to rinse off his toothbrush, he rinses it off. If I ask him to give something to Addie, he takes it right over to her. It's amazing how good he is at following directions when it is something he wants to do. He doesn't seem to understand the words, "No", "Don't walk in the street" and "Slow down". Ha!
But just look at his face!! No matter how stubborn and exhausting this little peanut can be some days, he has the sweetest face and gives the most loving hugs and kisses. He has become such a little hugger lately and I love that about him. He is also turning into quite a little ham like his sister. He does silly dances and tries to sing songs. Lately he loves playing the "pinch game" where he comes up to you and gives you a little pinch on your arm and he'll say "Ouch". If you say "Ouch" back, he will give you the biggest laugh ever.
You see...this is why I love blogging. These little details about Blake's life at 18-months will be hard to remember in a few years. Actually, they will probably be hard to remember in just 6 months! It's sad how fast time goes sometime, but seeing Blake grow into this little boy is amazing. He will always be my baby, even if he doesn't look like one. Tear :(
Blake's stats at this age are so different from his sister's. Addie was still such a chunky monkey at 18 months, but Blake is long and lean. He weighs 23.9 pounds (20th percentile) and is 34 inches (85th percentile). He is a super picky eater, but if he gets something he wants...the boy can chow down!! I don't know where he puts it!
It's hard to believe that the next time I update Blake's books he will be 2 years old!!!! In that time we will be taking our first mommy/son class together, going out trick-or-treating for the first time, taking our first trip to Disney and so much more! I just know these next 6 months are going to fly and I want to cherish every single moment...even the crazy ones :-)
Posted by Jen at 12:54 PM