It Wasn't the Smartest Thing I've Ever Done...

But I decided to run the Sundowner 5K last night in 118 degree weather anyway. Now that's what I call dedication :-)
But I'm not going to pretend like I wanted to go. I signed up for this race over a month ago, when temps around here were in the 80s. Then I slowly recruited two friends...Joe and Barb. Barb use to be a runner years ago and has just started back up. She was really wanting to do her first 5K and I was all, "Sign up for the Sundowner"! And she did.
So now I had two friends committed to this race with me. I knew early last week that it was going to be hot that day, but I had no idea that it was going to be as hot as it was. Then the news started throwing around all these Heat Advisories and I started to freak. I am just not good in the heat, especially running in it, so I told Joe and Barb I was going to bail.
Two minutes later, I got text messages from both of them telling me I needed to suck it up and quit being a baby. I also got text messages from my mom reminding me that heatstroke comes on in an instant and I had two children at home to think about. A little over-dramatic...but that's my mama. Eric also told me I was crazy for running but the peer pressure got the best of me and I went to the race anyway.
When we got there, we were in the shade and it didn't seem that bad out! 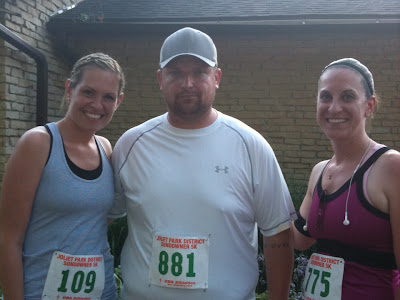 Yes...we were already sweating but it didn't feel like 112 degrees. So I decided I would just run what I could, and walk the rest if I got too hot. Plain and simple. That was Barb and Joe's plan too so at least we were all on the same page :-) 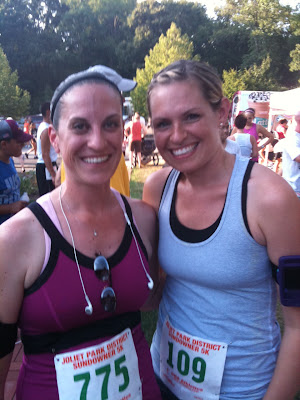 While we were lining up to start, I was blown away by the amount of people that came out to run, regardless of the weather. I even ran into my BFF Tiffany's parents who were at the start line smiling and having fun. Everyone seemed excited so I got excited too. The gun went off and we were on our way.
The course was on a trail through the woods so we were in 100% shade. I thought this was the best thing going for us. That first mile was pretty easy. Everyone was keeping good pace and when I saw the first water stop only 1/2 mile in I thought we were golden. We would have sprinklers and water every half mile and that would be just enough to get through the heat.
But we did not have water every 1/2 mile. The next water stop was at the 1.5 mile marker and the water was warm. Eww!! That's when I realized the rest of this race was going to suck. By the two mile marker I could feel my face turning red. I needed some water or a sprinkler or something but when I rounded the corner at about 2.5 miles and saw that the water table was EMPTY I about died.
I slowed down and tried to decide if I should just walk the rest of the way, or just keep running so that I could finish and get this over with. I really, really wanted that cold bottle of water waiting for me at the end of the race so I just pushed on. I ran as fast as I could (which was barely faster than a walk at this point) and then when I saw the finish line in the distance I just went for it. Crossing that line has never felt so damn good!
And all of my running buddies weren't far behind me. My friend Tiff's Mom (pink shorts) made it in great time and so did my friend Barb! 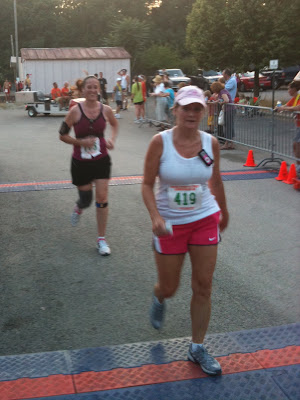 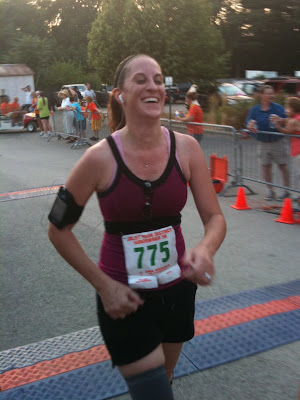 Even Joe was smiling when he finished. On the inside. Ha! 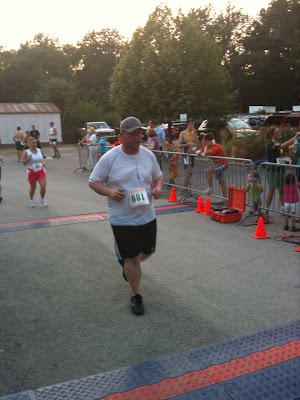 Even though we were all sweaty and disgusting, I made everyone smile for a picture with the medals we TOTALLY earned :-) 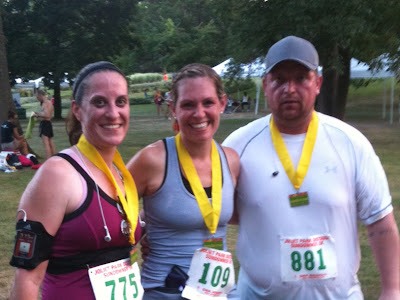 And then we went to collect our post race reward. BEER!!! Ice cold. 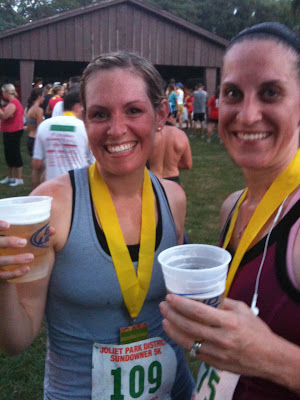 Joe thought he deserved two for that race. 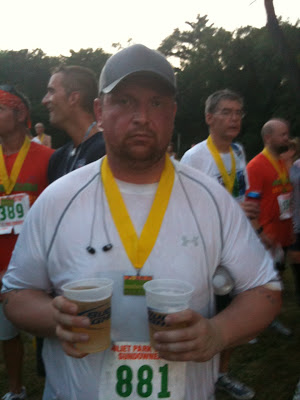 While I was in line, I ran into one of my old High School besties!! Jamie and I haven't seen each other in at least 2 years so it was great to catch up! 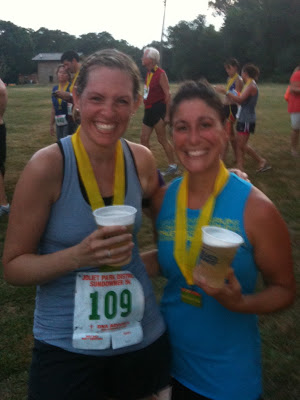 That, my friends, is the best part about running. Meeting new and old friends and having fun. I will never, EVER run a race in that kind of weather again, but it was certainly an accomplishment. It just makes me that much more excited for the fall. Ha!
Posted by Jen at 10:27 AM