An Anniversary Special: Funny Things You May Not Know About Us

After 3 years of blogging and 3 very romantic anniversary posts, I think I have pretty well covered the sappy stuff. You have all seen our wedding pictures a million times and in case you you haven't heard the story of how Eric and I got together, just check the "about me" tab and you can read all the lovey dovey details.
This year...I wanted to keep it real. Eric and I have been married 5 years now and we have two young kiddies sucking the life out of us daily. Long gone are the days of slow dancing in the living room or having spontaneous romps in the kitchen. Oh crap...did I just write that?
But those days will be back. Eric and I have learned a LOT about each other in the last 5 years and a LOT about making a marriage work. It isn't easy and things aren't always sunshine and roses. But if you love someone...and I mean really love someone...you figure it out. You figure out how to be real and take things day by day. You praise each other for the things you love about them, and accept the things that you don't love quite as much. You learn to compromise and take an interest in each other's lives. And most of all, you try to make the most of the moments you have together. I am just so grateful that I married a man that I can be myself around. I can be crazy, overdramatic, high-strung, controlling, obsessive...good Lord...why did he marry me? Haha :-)
And even in my worst moments, Eric has been there to pick me up. He NEVER sweats the small stuff, whereas I sweat everything. I think that's it actually...the reason we work so well together is that we are the polar opposite of each other in so many ways. For example:
* Sleeping: Eric sleeps like a vampire. On his back, arms folded over his chest, and he won't move an inch until morning. It kind of freaks me out sometimes...to find him in the EXACT position he was in when we fell asleep. I, on the other hand, flop like a fish all night. I am in at least 30 positions before I wake up .
*Eating habits: Eric would eat beef with a side of beef if that was an option at a restaurant. He could care less about sides and doesn't even eat them half the time. I could actually base a whole meal around sides. Do you see why this works so well?

*Academic skills: Eric will spend an hour writing a Facebook status update because he never knows what to say or how exactly he wants to say it. But...the man can do long division in his head and whip out numbers and estimations that make me go cross-eyed. I can't even subtract fractions or multiply properly half the time, but I could write my way out of a paper bag (is that a real expression?) I guess we can rest easy knowing that our kids will get all the help they need in math and English. Sadly, they are both screwed in science.

*Music: He's a country boy, and I'm a dancin' queen. I would rather listen to the classical station for 24 straight hours than listen to 5 minutes of country. Okay...there may be a few country songs and bands I am starting to like, but I will never fully admit that. And Eric would rather stick a pen in his eye then listen to one song by Britney Spears or Jamiroqui. Oh well...at least we have Train!

*Getting "In the Mood": I think I speak for a lot of ladies when I say that most men don't try hard enough to get their wives "in the mood". I mean...we aren't that hard to please! Put on a little Dean Martin, say something sweet, fold a pile of laundry...it's not rocket science! But Eric, like most men, can be in the mood in the drop of hat. I could sneeze in a "sexy way" and he'd be ready to rock-n-roll. Men are so easy.

I know I am doing a lot of joking here and spending an awful lot of time pointing out our differences, but  Eric and I really have a lot in common too. And the good thing is that all of our similarities are about important things. Things that matter greatly to both of us. I think the most important thing that we both believe in is saying "I love you" as often as possible. We never hang up the phone or leave the house without saying it to each other, even when we are angry. Sure, I might give it a sassy tone if I am upset, but I still say it. And mean it. I never want the last words we speak to each other to be anything but words of love and I know Eric agrees with me. Life is too short.

Okay...I promised no sappy love stuff so I will stop there and leave you with my FAVORITE picture of Eric and I. It's not a posed picture and I'm pretty sure my teeth couldn't get any bigger...but it is real. The laughter and the love. Just like our marriage :-) 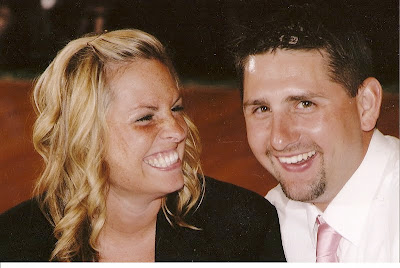 Happy Anniversary Babe!!! Thanks for giving me the greatest 5 years of my life. I love you with all my heart :-)
Posted by Jen at 12:00 AM