There is one big advantage to living in the midwest...no hurricanes. I feel bad even bragging about the weather here this weekend but it was truly BEAUTIFUL in Chicago. The perfect weekend to spend downtown with my sweetie.
We've been planning our little anniversary weekend for a while and at first, I wasn't sure if it was worth paying for a hotel room when we live so close to the city. But the idea of a peaceful night's sleep with no interruptions from kids or dogs was getting more appealing by the day. So after I found a pretty fantastic price on a hotel room, we booked it. And friends...I am SO GLAD we did!! Here we are all dressed and ready to head out on the town. 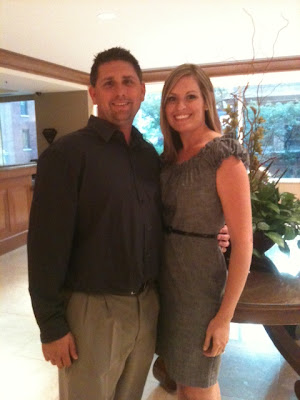 Our date night started with a fantastic dinner at Fulton's On the River. We couldn't have picked a better night for outdoor seating. They have the best patio in the city I think :-)

We spent a good two hours here just relaxing, having some wine, eating some delicious food and indulging in the best piece of banana cream pie I have EVER had!!! We will definitely be back to this place. Yum :-)
After dinner, we took a nice long stroll through the city. It was such a beautiful night and we were right in the heart of downtown. We had every intention of stopping at a piano bar to have another drink and relax but let's be honest...we're old. And we're parents who rarely get a night to ourselves and the idea of lounging around our gorgeous hotel room was a lot more appealing then drinking at a piano bar. I know...it's pretty sad...but we enjoyed ourselves. A lot :-)
I actually expected to get the best night's sleep I've had in a long time, but I didn't! I tossed and turned all night! My kiddies were in great hands with Nana and Papa so I wasn't worried about them. And after two glasses of wine at dinner, I was finally over my whole school night fiasco. But for some reason, I was just totally restless. Is anyone else like that when they are away from home? Don't get me wrong, I loved sleeping in 4,000 thread count sheets. And not having to make the bed in the morning. But I wasn't as rested as I thought I would be. Eric, on the other hand, slept like a baby and told me this morning that getting a room was the best idea ever :-)
What made the night worth it for me was our delicious breakfast at the hotel and my solo stroll to Starbucks for a big mocha :-) Eric stayed back at the hotel and played Angry Birds while I went to get coffee. Haha! My parents told us we could stay in the city for the day but we both agreed that we would rather get home to enjoy the gorgeous day with our babies.
This little chick right here thought it was the perfect day for a bike ride... 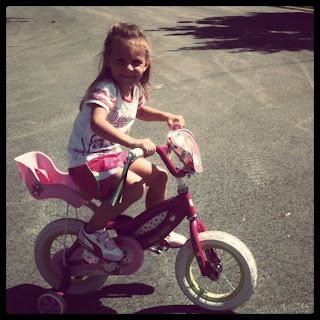 So daddy went with her... 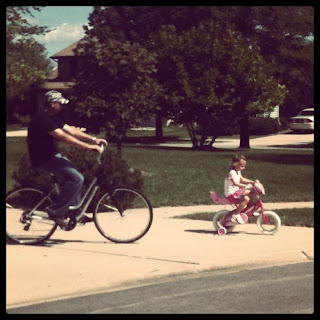 Blake still can't peddle, so he went for a drive in his car instead. And then left it in the street when he was done :-) 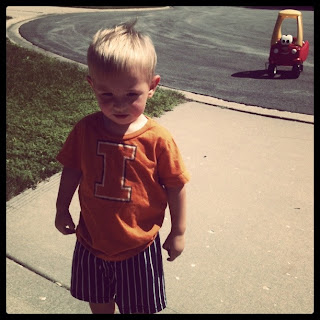 Even this little fatty was excited to get some fresh air and exercise. He mostly laid in the shade but whatever. He was still outside :-) 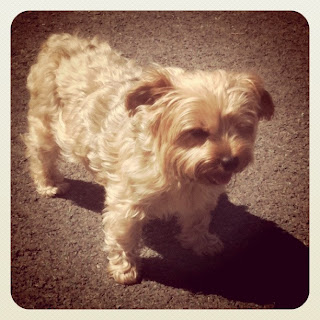 Now my entire house is napping and I am going to sneak in some blogging and Pinterest time with my windows wide open. Ahh...if only I could walk to Starbucks again :-)
I hope you all had a fantastic weekend too!!! And Nana and Papa...thank you SO MUCH for keeping all the kiddies (including Howard) for us this weekend. We are so lucky to have you :) And Eric...thanks for giving me such a wonderful Anniversary week. Love you so much babe!!
Posted by Jen at 1:54 PM