Even though December is apparently the least popular month to have a birthday (considering how many people have told me they "feel sorry" for Blake), there seem to be a MILLION birthdays this month for us! Today is only December 5th and we've already been to two parties!
If you ask me, I think December is a wonderful month to celebrate a birthday! Everything is so festive and fun...what's not to love? We celebrated the first birthday of the month on Saturday with Uncle Joe. He chose to have his birthday dinner at a Brazilian Steakhouse and OMG...I have never seen so much meat in my life!!! It was a carnivore's paradise and Uncle Joe was very excited. Can you tell? 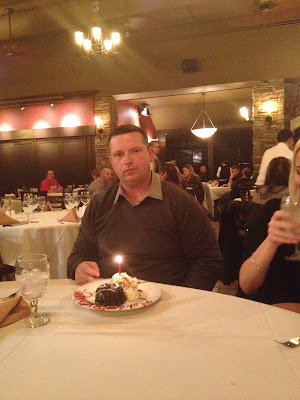 Well...take my word for it. He was excited. Actually, he was just about as excited as our second birthday boy...Mr. Cole! 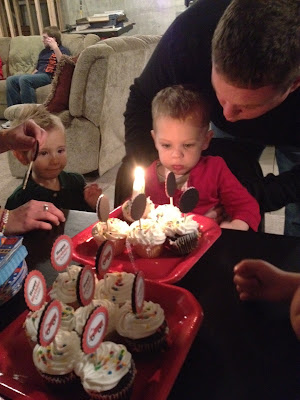 Okay...so I guess my camera phone didn't exactly capture the true emotions in the room, but you get the idea :-) It's hard to believe my little Cole (who actually turns 2 on Christmas day) is already such a big boy! And look at my little birthday boy next to him. I could just cry looking at these two! Where has the time gone?

I actually realized the other day that I only have a month until Blake's second birthday party!! AHH!! It's a good thing we've already decided on a Disney's Cars theme. It was either that, or have an Oh TWOddles Mickey party! You like that little play on words? I came up with that after I sent his invitations to the printer so I couldn't switch. Damn it! Oh well...I still have a lot of fun ideas for his Cars party, but I will save those for another post :-)

Happy Monday everyone! Time for this mama to get some work done :-)
Posted by Jen at 1:52 PM