I have to admit...when I saw everything that was on our calendar for this weekend...I let out a really loud sigh and said, "Ahhh shit" I mean "YAY!!!!!!" Recital pictures, a birthday party and my first race of the season (an 8K no less). I was a little tired just thinking about it.
But like all busy weekends you anticipate, the moments come and you wonder why you weren't more excited! It turned out to be a FANTASTIC weekend.
Addie's recital pictures were first up on the list Friday evening. Last year's recital photoshoot was total chaos and I was worried it was going to be more of the same this year. But to my TOTAL surprise, the studio had everything running like clockwork, Addie let me do her hair and make-up without a fuss, and all the girls looked absolutely adorable. Here is my sassy little diva before we left the house... 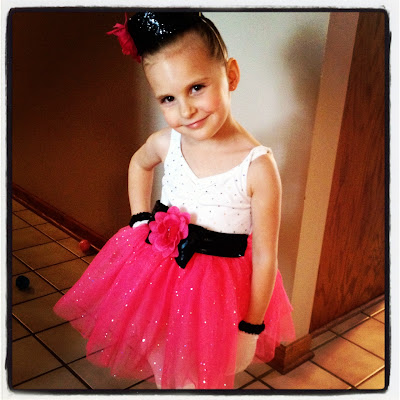 The girls are dancing to, "You've Got a Friend in Me," from Toy Story and I can't wait to see her performance in June. It will be here before we know it!!
After pictures, it was off to bed early because a certain little man had a birthday party this weekend!! 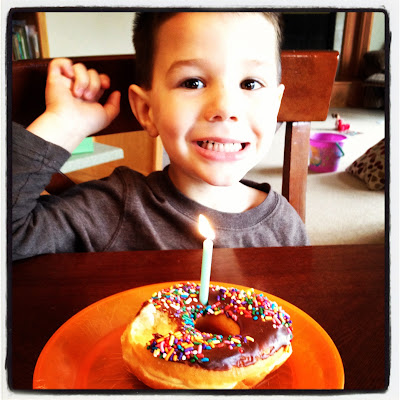 I had Nia and Nolan come over Saturday morning for some birthday donuts so that Dana and Kevin could get their house ready for the big party. After all, they weren't just having human guests. There were also a bunch of reptiles coming to the party!!!!
When my SIL Dana told me that she was having a reptile show for Nolan's party, I was a little freaked out. I am not a big fan of spiders, lizards and most of all...SNAKES!!! So when they pulled out one of the first "guests", I made sure to stand back and just take pictures. Eric was a brave soul holding that spider... 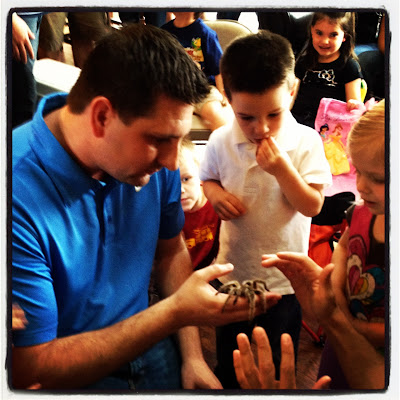 The kids wouldn't touch it, but they were totally fascinated. 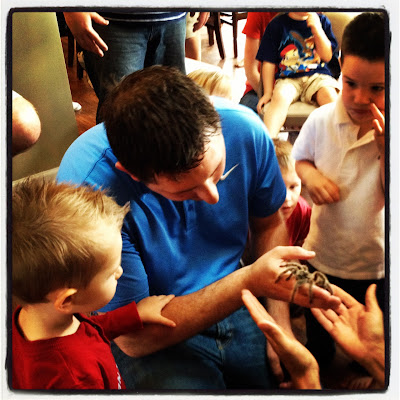 The company that did the show had all kinds of creatures. They brought out two huge lizards, the spider, a huge bull-frog and then this baby alligator... 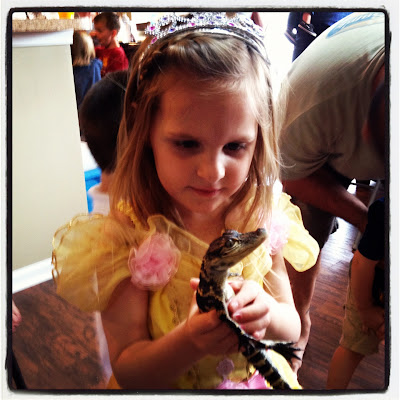 My daughter has no fear. Not even when they brought out a 13-foot SNAKE!!! 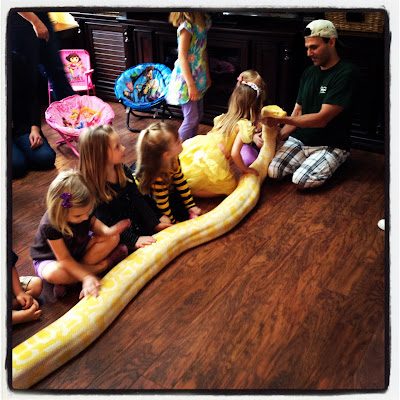 CAN YOU BELIEVE THIS?? It was in my SIL's living room. And the kids were all just, "La La La...look at this cute snake." Even Blake took a liking to him! 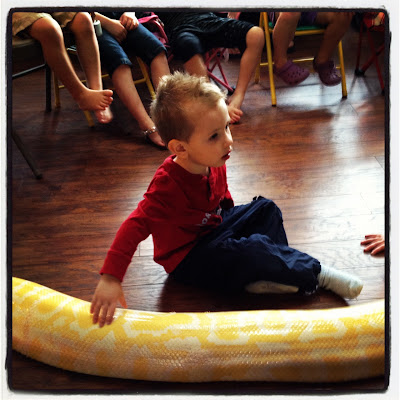 It was unreal. Dana played it pretty cool too but when Nolan went and sat in the middle of the snake, she was over it. Haha! 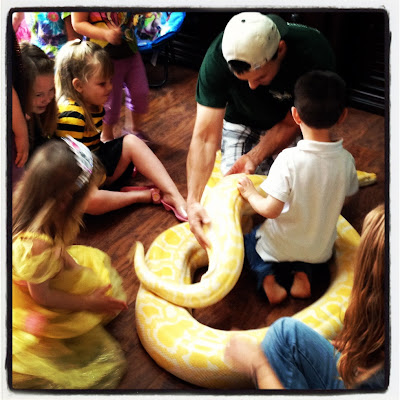 We all could not get over how fearless these kids were. Here's Nia with her snake necklace and headband!! 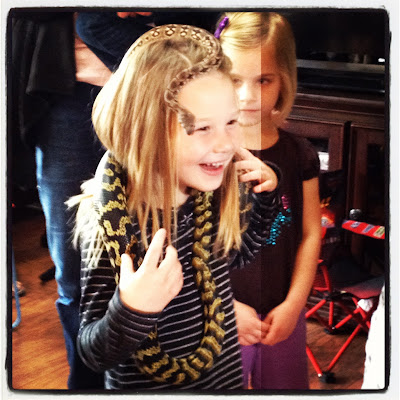 Seeing the kids play with all these snakes made us grown-ups feel like a bunch of pansies. So some of us stepped it up and held the snakes too. Here's Katie being brave. 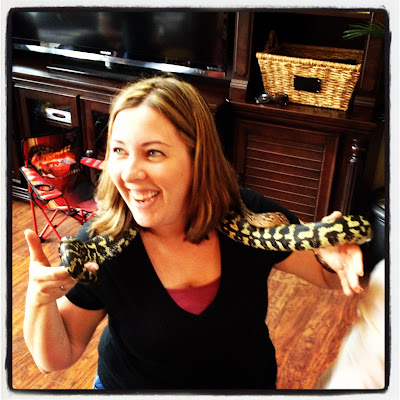 And are you ready for this?
I even held the snakes! AHHH!!!!! 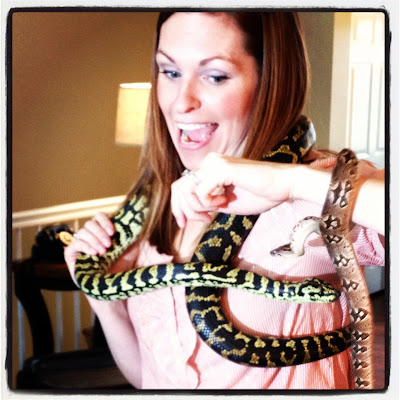 I still cannot believe I did that. I'm gonna have nightmares for weeks :-)
Dana and Kevin always throw great parties but this was over the top fun. Dana has way better pictures on her camera and I hope to steal them soon because seriously...you have to see my Mother-in-Law holding the tarantula!!
Amazeballs.
It was really hard to get the kids (and myself) to wind down after such a fun party, but once we did, it was lights out. And it's a good thing too because I had to run the Shamrock Shuffle 8K this morning!!! I made sure to get all decked out for it :-) 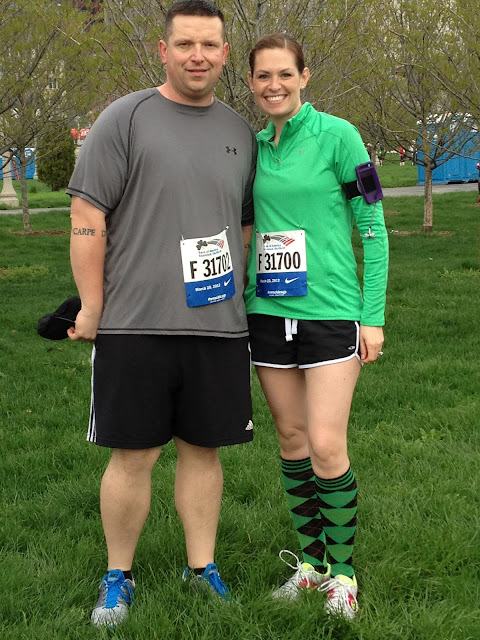 We could not have asked for a more GORGEOUS day in the city. Joe and I felt a lot more confident going into this race than we did last year, so that made it an even more fun and exciting experience. Sure...Joe wasn't the first guy to finish...
He was... 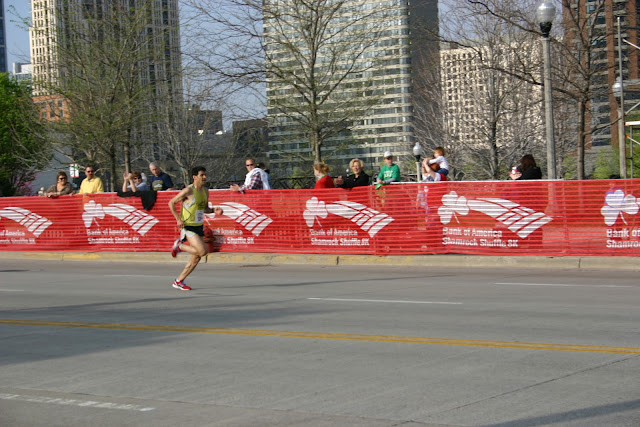 And I wasn't the first woman... 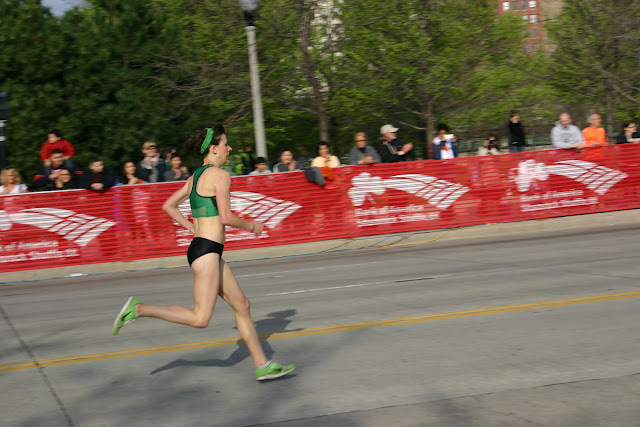 Or the second to finish... 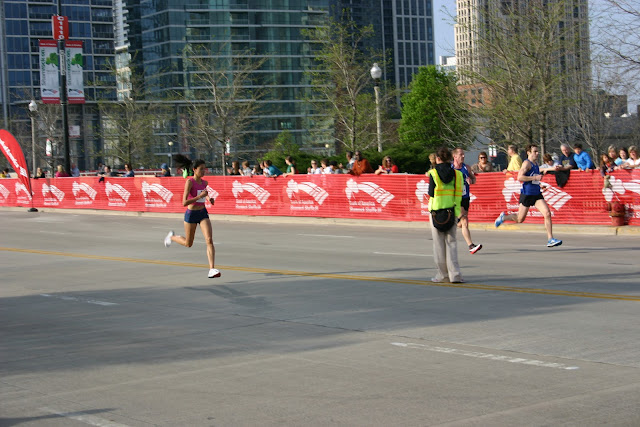 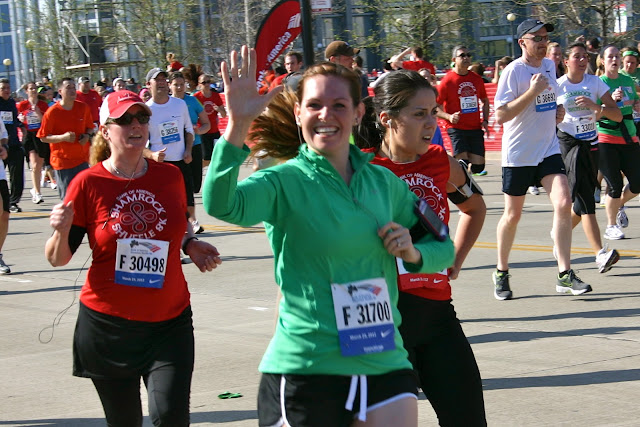 But that's good enough for me... 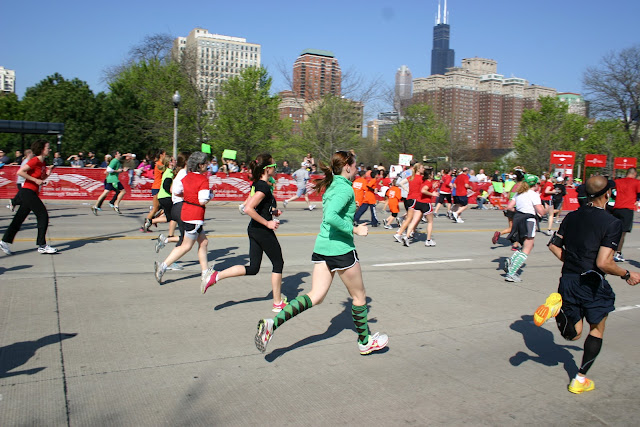 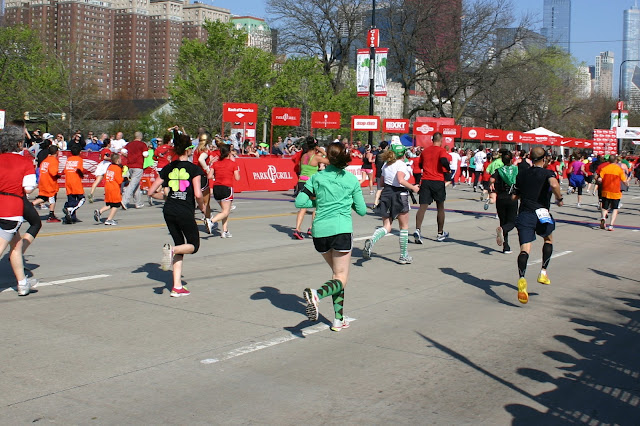 Joe and I both finished in 55 minutes, which is a huge improvement from last year. 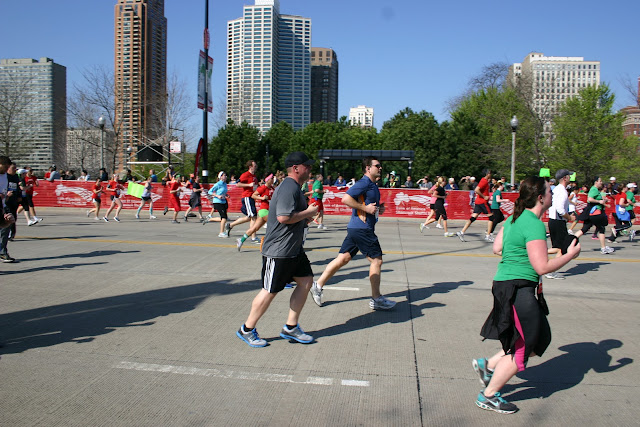 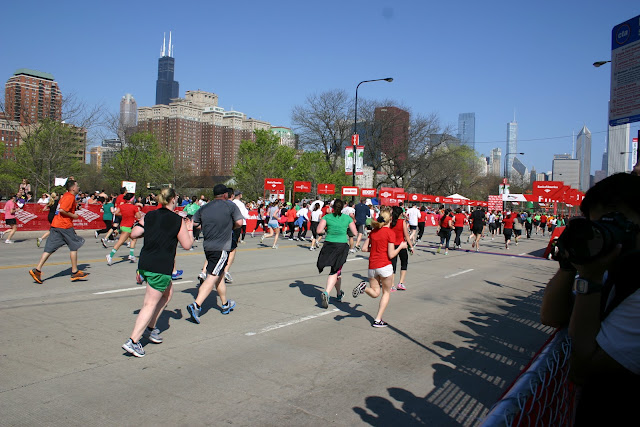 I think what made today the most special was having my Dad there to see me run. 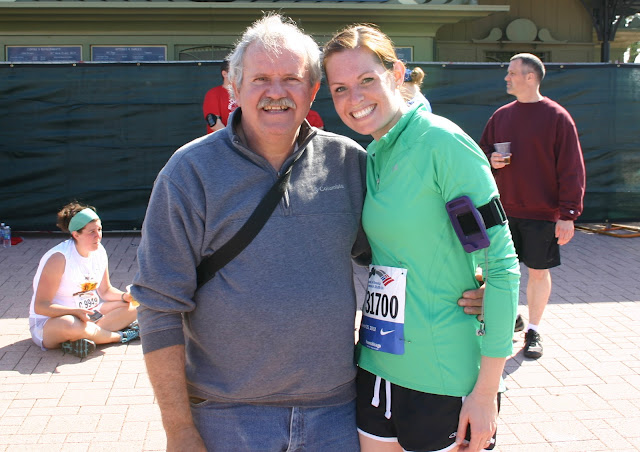 My Dad was quite the runner back in his day and I think it really made him proud to see me take such an interest in something he use to love. He made a promise to me today that he would get back into jogging shape and try to do a 5K with me this fall. I am holding you to that Dad! And so is Joe :-) 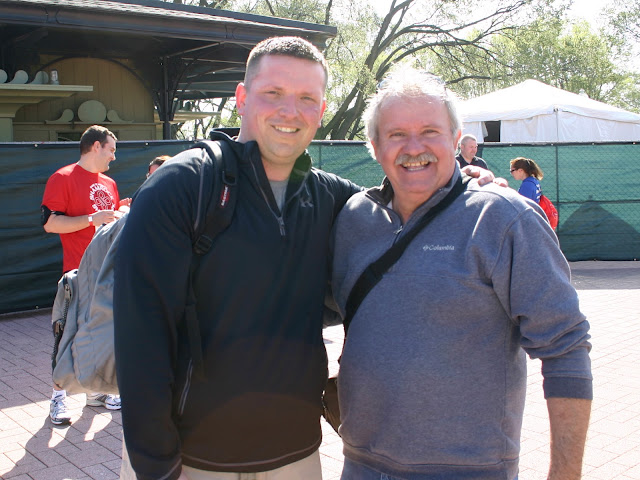 {Please note this photo was approved by the Frown a Face Foundation :-)}
I also had my fabulous hubby out to support me today, thanks to Nana who was willing to watch both kiddies all day for us. Thanks Nana! 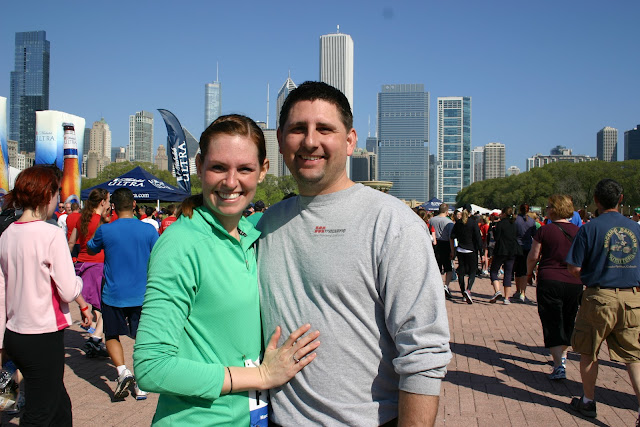 I am a fan of Nike Running on Facebook and they posted this picture today along with a congrats to all the runners of the Shamrock Shuffle who came out and shamROCKED Chicago this morning. I just had to repost it because it was so true... 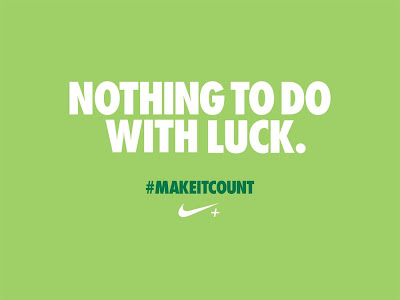 Running has nothing to do with luck. It takes a lot of hard work and dedication. But most of all...it takes a lot of support and encouragement. Thanks to all my family and friends who supported me today, especially my Pops and Eric...the best cheering section in the whole city! 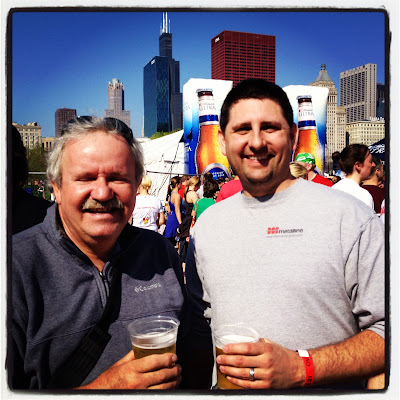 I hope you all had just as fabulous of a weekend as we did!!
Posted by Jen at 9:25 PM