I know I say this every year...but that was the BEST Halloween yet :-) The kids were both so good today, despite the lack of naps and ridiculous amount of sugar. Blake actually wore his costume...AND LIKED IT...and Addie pretty much made the cutest Snow White ever.

But before the costumes and trick-or-treating today, Addie had her preschool Noah's Arc Pajama Party. They did lots of singing... 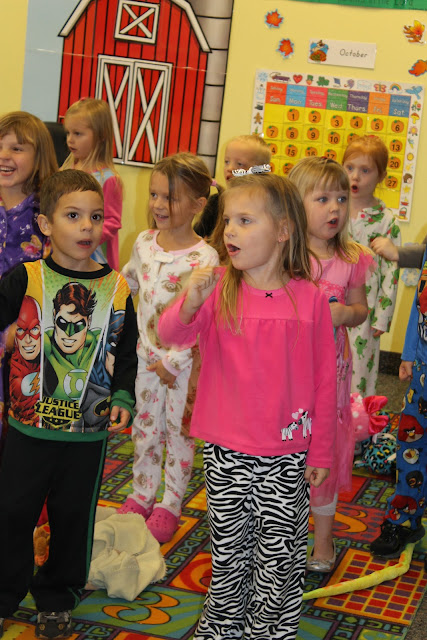 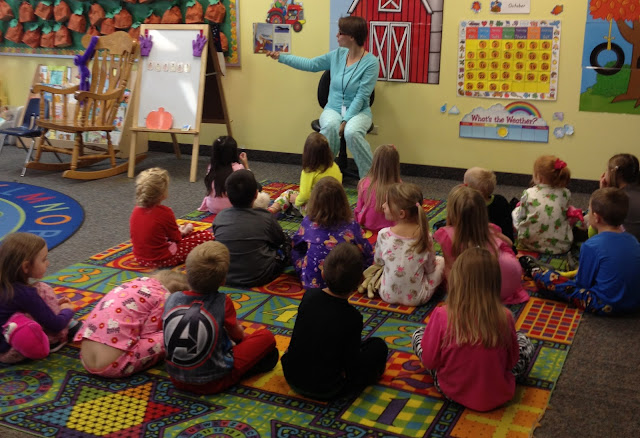 And after a special snack, they got to create their own Arc. It was so sweet...the kids had the best time. 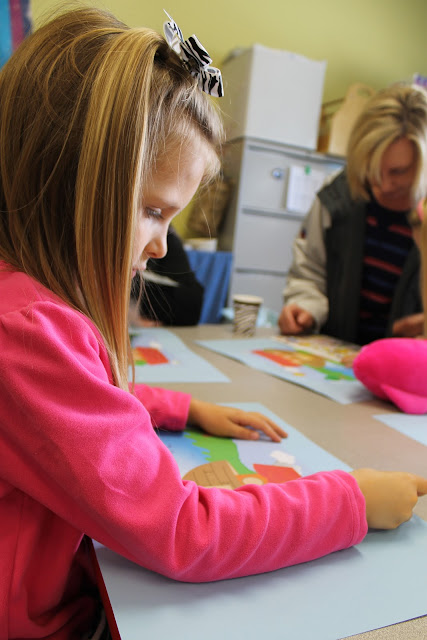 If you can believe it, I attempted to do quiet time/nap time with my kids today. Even though they both knew they were getting to dress up and go trick-or-treating in a matter of hours.

In fact, Snow White here was dressed and ready LONG before it was time to leave. But seriously...isn't she precious? She made the most beautiful Snow White ever :-) 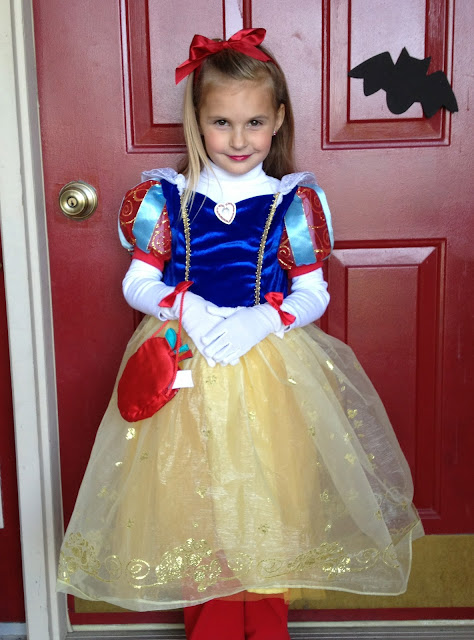 And Blake made the cutest Lightening McQueen ever...for the second year in a row!! He was such a happy little camper tonight, which made me SO RELIEVED!! Costumes aren't his thing and the boy had some serious attitude earlier in the day. But as soon as it was trick-or-treat time...he couldn't put on his race suit fast enough. 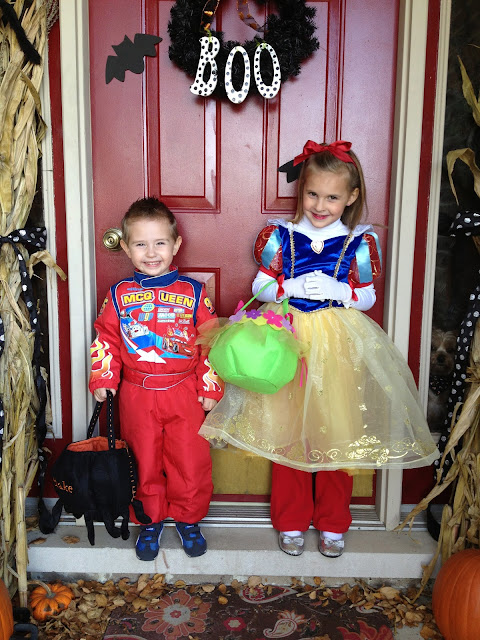 Our first stop was Mima and Papa Steve's house so that the kids could all run around together and stop at a few houses. Just look at these goofballs...I love them to pieces. 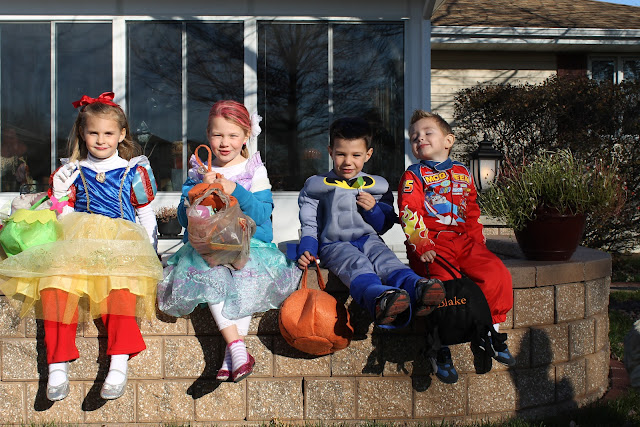 They couldn't wait to take off to the first house... 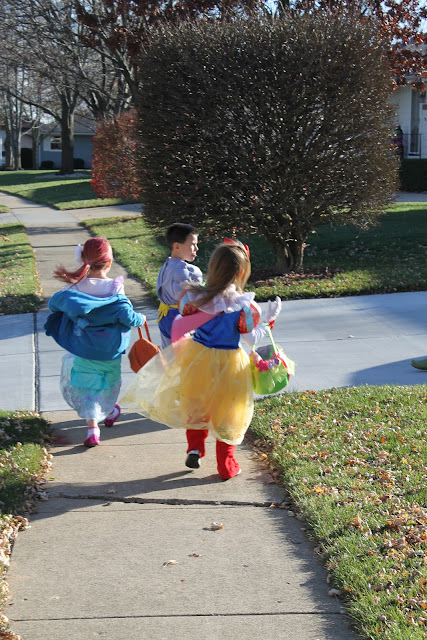 This is Blake telling the kids to slow down. My boy likes to take his time at each house... 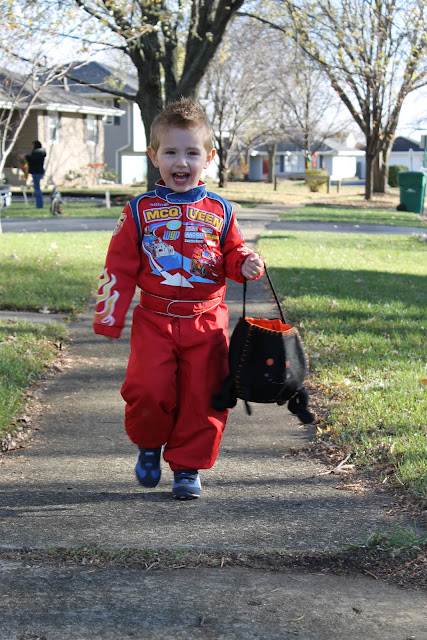 And check out all the awesome decorations :-) 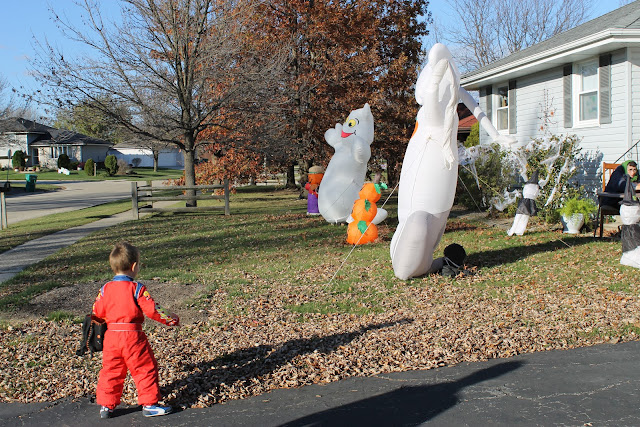 These ghosts were his favorite :-)

After filling our candy bags once, we headed back to our house for more trick-or-treating with Nana and Papa. We ordered some pizza, passed out some candy, gave the kids a bath to wash off all the chocolate and when they were literally starting to fall asleep sitting up...we tucked them in bed :-)

We had every intention of doing some FaceTime with another Halloween cutie, but the night got away from us so we will have to raincheck for tomorrow :-) But luckily, we got to see some ADORABLE pics of Owen and his first trick-or-treating!!

Here is the little Bumble Bee himself... 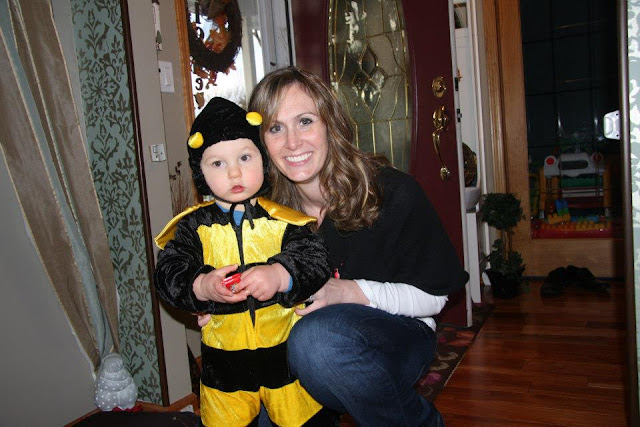 Out trick-or-treating with Mama. This picture made all of us get a little teary-eyed. He is so grown up!! 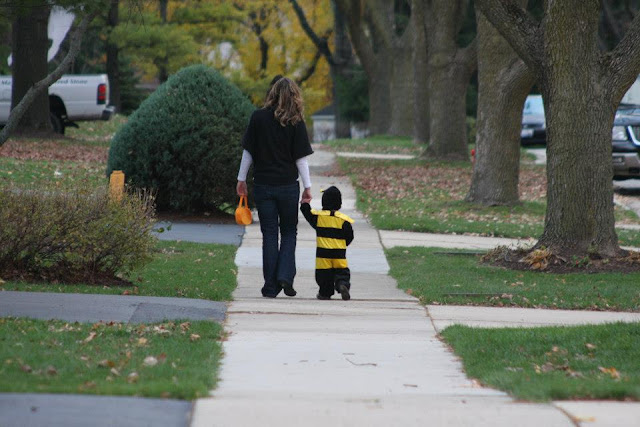 Well I hope everyone had a Spooktacular Halloween!! I know we sure did :-)
Posted by Jen at 10:33 PM