Our Week in a Nutshell: Thanksgiving Fun & The Arrival of Toodles the Elf

For almost a month, I've stared at the 5 blank days that were on our calendar last week. No preschool. No ballet/tap. No class for me. No commitments. 5 WHOLE DAYS with nothing to do...and that included Thanksgiving day (since our two Thanksgiving feasts were on the Sundays surrounding it). And the best part...Eric was off work 2 of those 5 days. We were so excited to just do nothing.

But the kids had other plans :-)

You see...Addison and Blake aren't big fans of staying home. Or relaxing. Or sitting still for 5 seconds. Not even when they have the 12-hour flu (which also showed up during our week off. Boo!)

So when Addie BEGGED me for a playdate because she was feeling better and "bored to tears," we invited some girlfriends over for coffee, donuts and a little dress-up. Playdates are honestly my saving grace as a Stay-at-home-mom. The kids are entertained, you can catch up with friends (for at least a few minutes) and typically...there is coffee and/or wine involved :-) 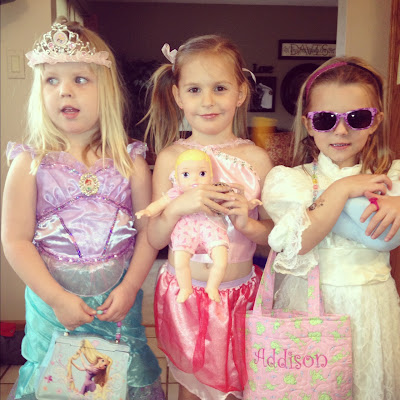 On Thanksgiving Day, Eric and I debated about staying home or taking the kids to see Rise of the Guardians. I, of course, was all about staying home in my jammies but as soon as Blake heard the word "popcorn"...the decision was made for us. And I'm actually really glad we went because the movie was SO CUTE and both kids sat through the whole thing. It was a fun trip :-) 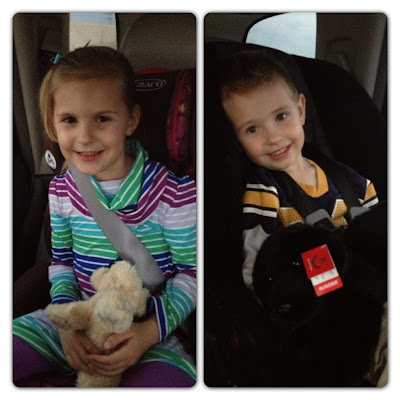 Afterwards, we ended up heading over to Aunt Dana and Uncle Kevin's for some dinner. The kids played, the guys watched football and the girls sat at the kitchen counter making Christmas lists and doing some early black friday shopping online. It was actually a very productive night :-)

By 7:30, it was time to start packing up to head home but once again...the kids had another plan. They decided it was the PERFECT night for a sleepover. So, Dana and Kevin kept the girls and we took the boys home for their very FIRST sleepover together!! I have never seen two boys more excited to be sleeping in a pink polka dot bed together :-) 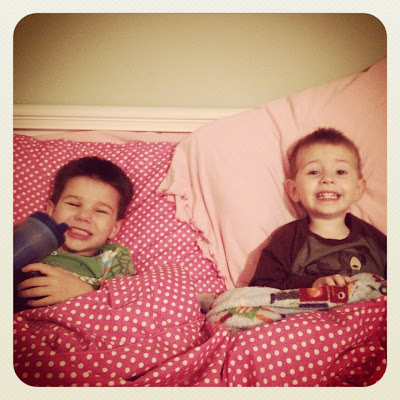 I'll admit...I was a little worried that these two would not sleep the night together but to my surprise...they did great and woke up like two happy little campers!!

The next day, we FINALLY got the chance to stay home in our jammies and relax a bit. That was also the night our Elf decided to arrive!!! 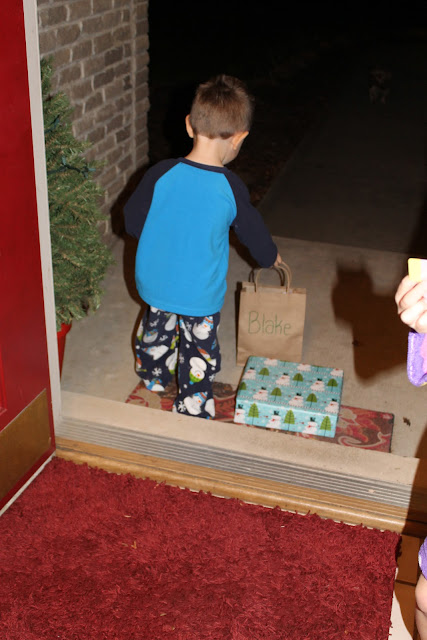 I know every family has their own traditions but at our house, our Elf on the Shelf arrives in his box (with his book) all wrapped up on the front porch. He magically rings the doorbell and the kids coming running to find him. This year, he brought two little gifts with him. 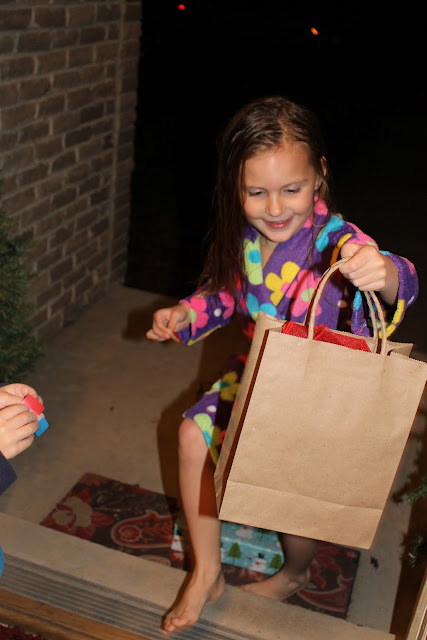 Have you ever seen two kids more excited for new Christmas jammies?? 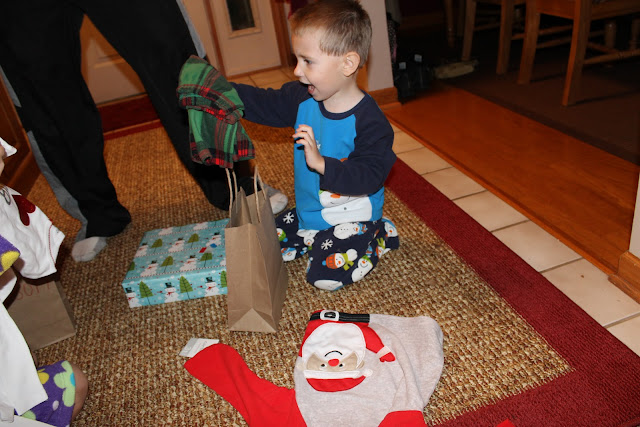 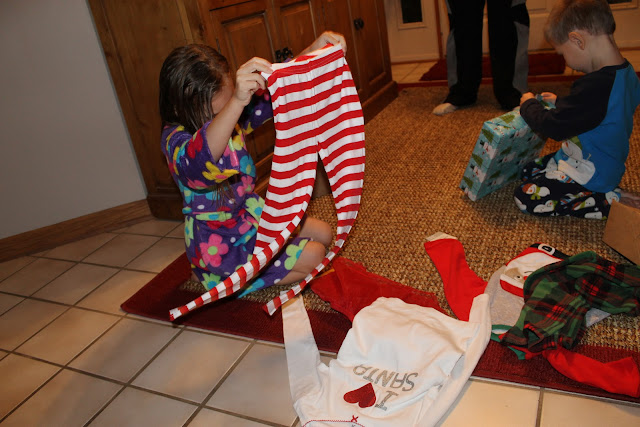 This was the first year that Blake remembered Elf when he arrived and it was so fun seeing him get as excited as Addie. 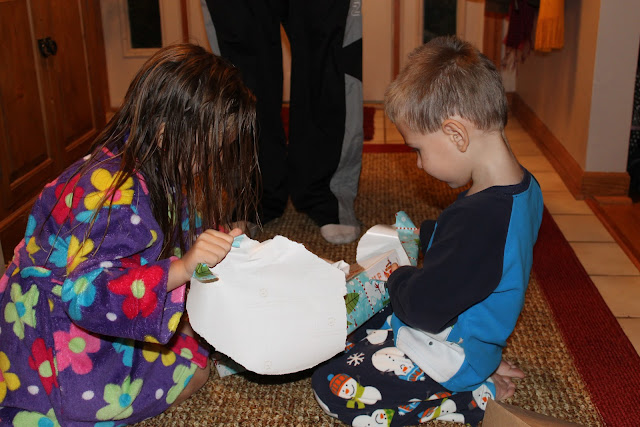 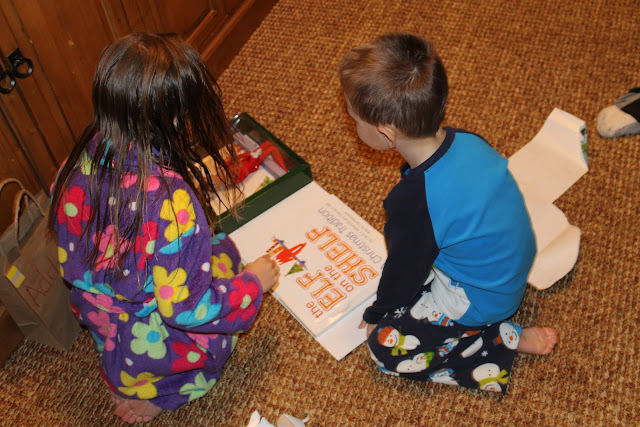 He must have sat and "read" the book for 20 minutes. 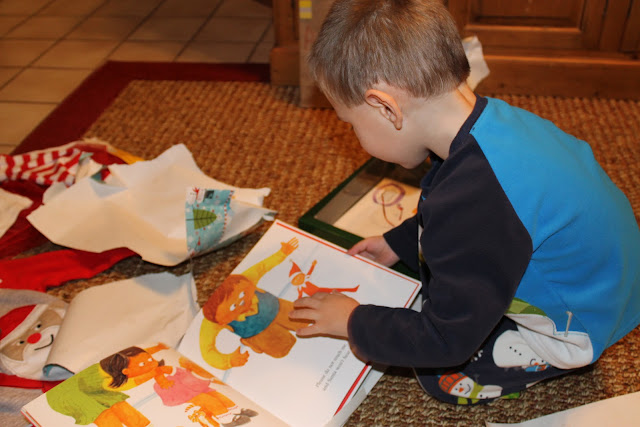 While he was busy reading, Addie was busy rummaging through her stuffed animals to find a little Elf that my grandma gave her last year. This thing has to be 20 years old but strangely, it looks a LOT like our Elf on the Shelf. Addie has named this guy "Pierre" and he is going to be Toodles buddy for the season :-) 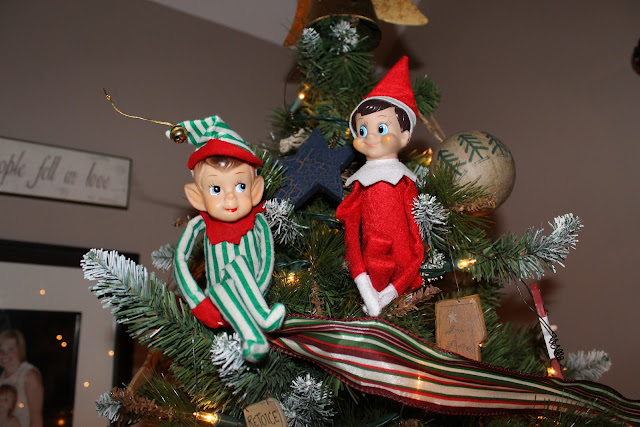 On Saturday, Eric and I were on a mission to prepare for our big Thanksgiving feast today. We had turkeys to pick up, grocery shopping to do, tables to set... 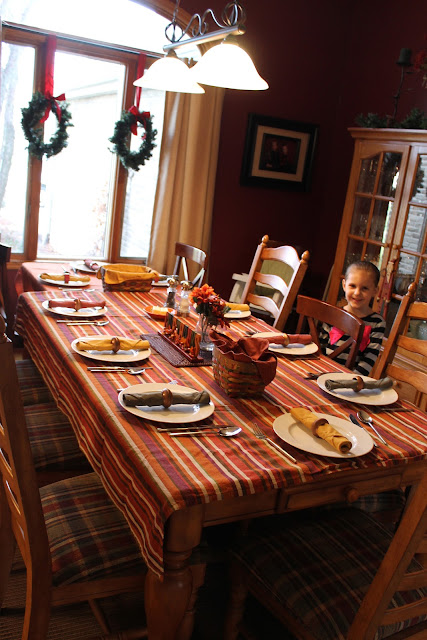 Luckily...I have a pretty awesome little helper that set almost the WHOLE table by herself. What a sweetie.

I am happy to say that our Thanksgiving feast was a HUGE success today! Eric and I tackled two turkeys and they were both delicious...even though Eric's super duper deep friend turkey was the brunt of some seriously funny and inappropriate jokes. 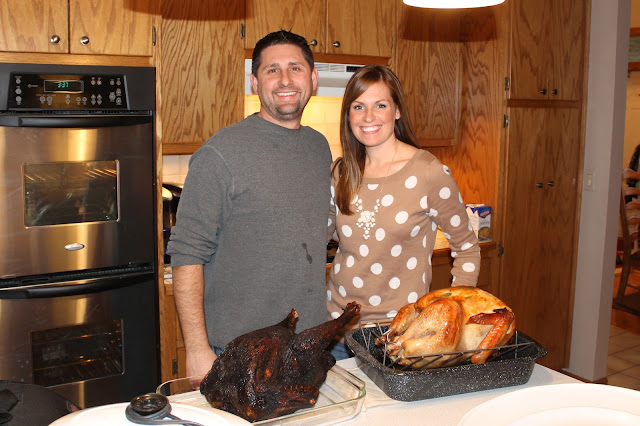 And speaking of two turkeys...check out these dudes in the turkey shirts that Nana made them! 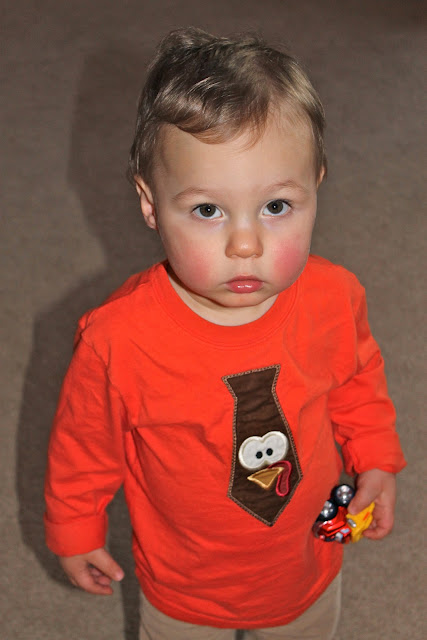 They both totally love the camera...as you can see. 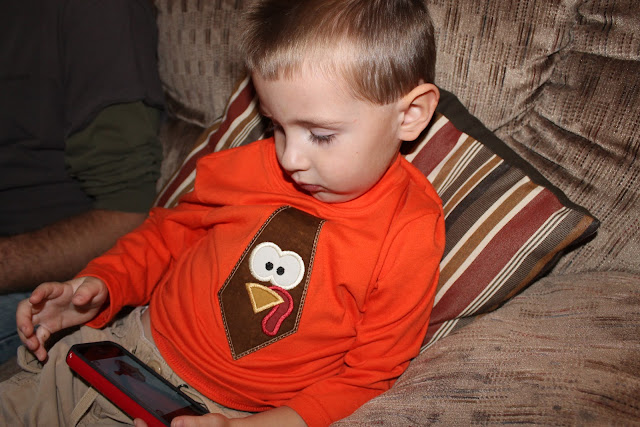 Oh well...at least I got some people to smile for me!! 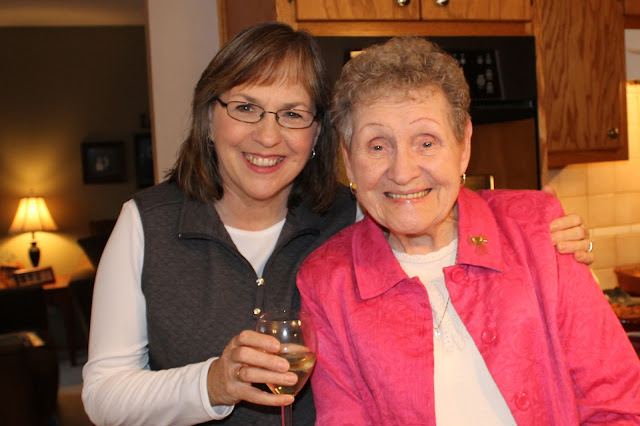 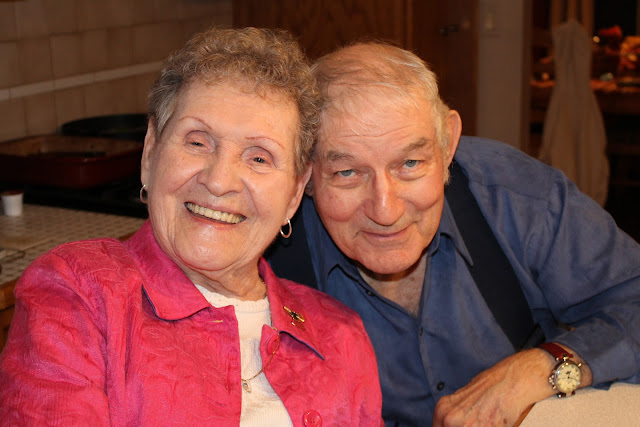 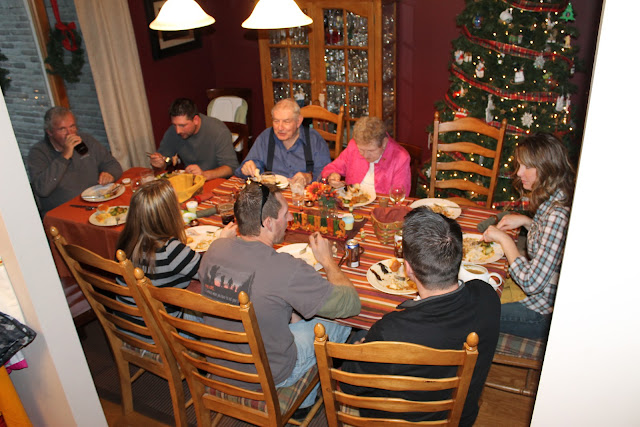 Or one little table... 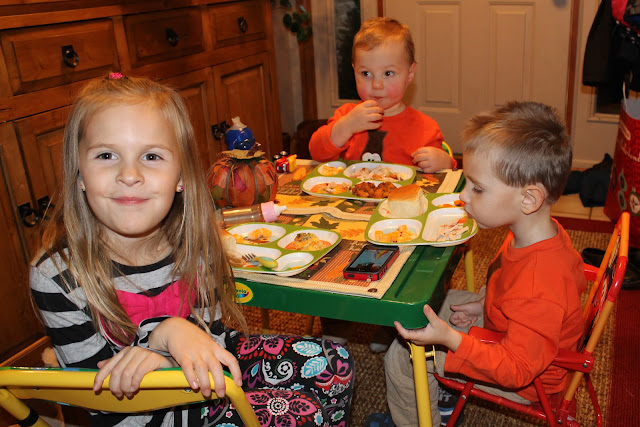 And share a special meal with your family is a gift...one that I am very thankful for this year...and every year :-)

So after we chowed down...we started taking bets on who the first one would be to fall asleep. I had my money on Richard (my Grandma's BF), but it was actually Blakey Boy!! Nana has the touch I guess. 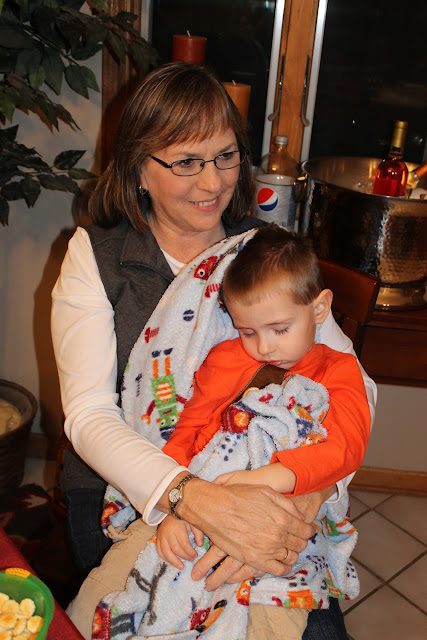 It was another fabulous Thanksgiving in the books.

But now it's back to reality tomorrow! Why are Monday's always so much harder after a holiday??

Well I hope you all had a lovely Thanksgiving week with your family too!!
Posted by Jen at 11:33 PM