Our Weekend in a Nutshell: Family Time & Running for Chocolate

Happy Sunday everyone!! It has been another fun-filled weekend around here.

It's not often that Eric and I have a free weekend day to do whatever we want, but when we do...we like to make the most of it.

So when we found out that Eric didn't have to work on Saturday, we packed up the kiddies and headed downtime to take them to the Shedd Aquarium! 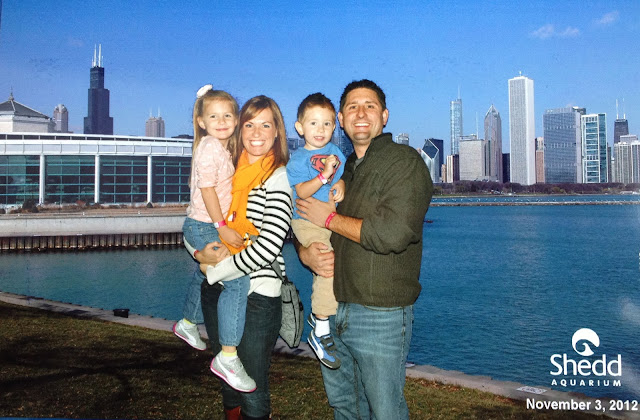 This was their first time here and they had a BLAST!!! They didn't know where to look first. 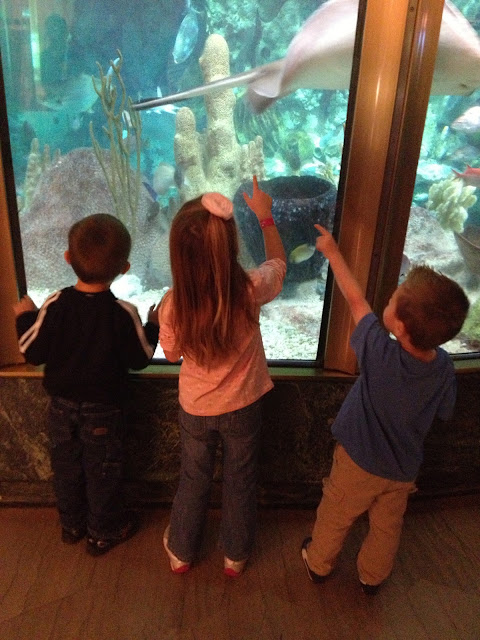 Blake was probably the most excited out of anyone. He was so stinkin cute. 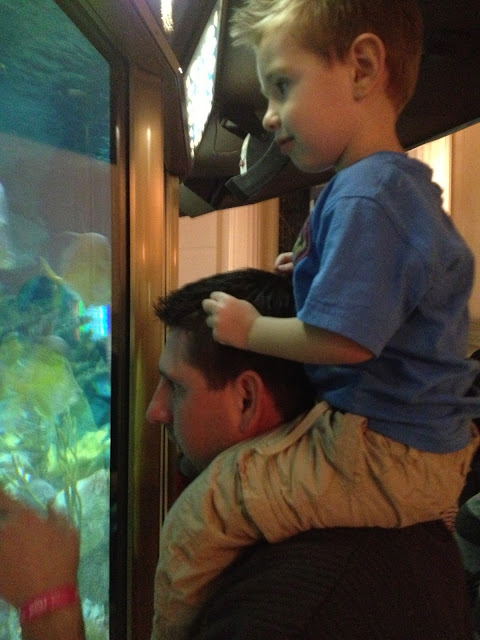 We saw all kinds of new creatures and gave them our own names. Here we have Monster Turtle, Pink Jelly Snakes, Sea Horsie, and Mr. Crabs :-) 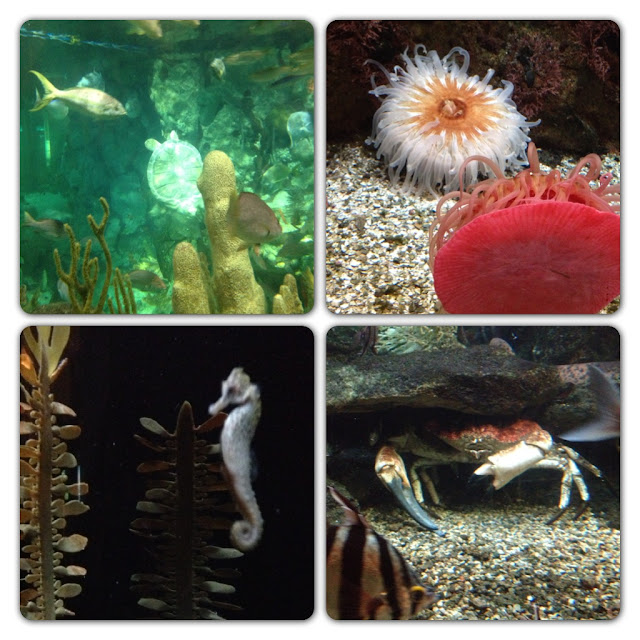 And of course Blake's favorite, the "Charks"!!! 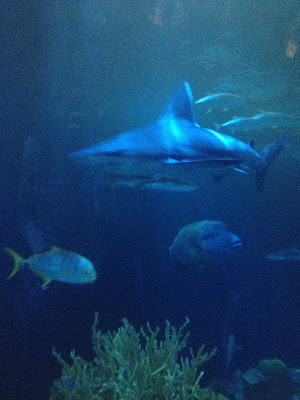 We managed to take in two shows while we were there. The Ice Age 4D movie, and the Aquatic show. As beautiful as this view was... 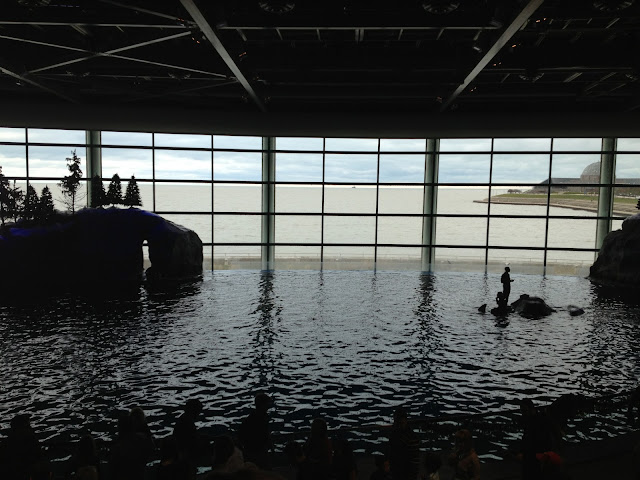 And as fun as the dolphin's performance was at the end... 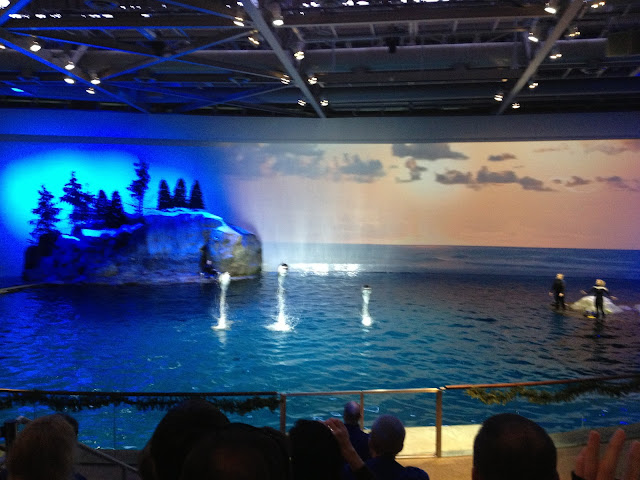 The kids were not that impressed. Now don't get me wrong...the Shedd puts on a fabulous show that is very educational. They introduce new animals and talk about how they train them. But a 2 and 4 year old could give a flying shiz about how those dolphins are trained. They just want to hear some music and see them make a splash :-)

And that they did!! The whole trip was awesome for them and I am so glad we went. Eric and I are already considering getting a city pass so we can take them to the Shedd, Planetarium and the Museums more often.

In fact, Addie said she wants to go to the Field Museum next so we can see some dinosaurs. But on this trip, we just settled for a few pictures with the dino outside :-) 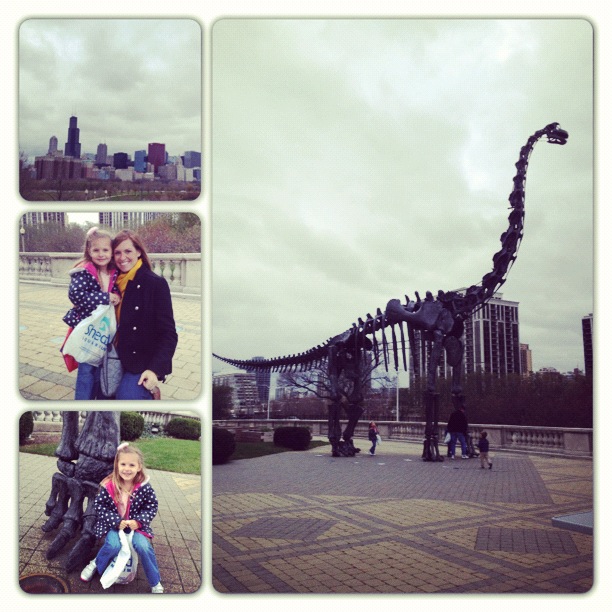 After spending the day in the city, it was nice to get home and have some R&R before the kids headed off to Nana & Papa's house for a sleepover. My BF Tara ended up coming into town last night so that we could enjoy a nice girl's dinner and watch a little Twilight (in preparation for our movie date next week). But then it was off to bed early because we had to wake up at 4:30 IN THE MORNING to run the Hot Chocolate 5K today.

Even though it was SUPER early and pretty chilly outside...I was psyched to run this race. After all, it was my first 5K running side-by-side with my Daddy-O!!! 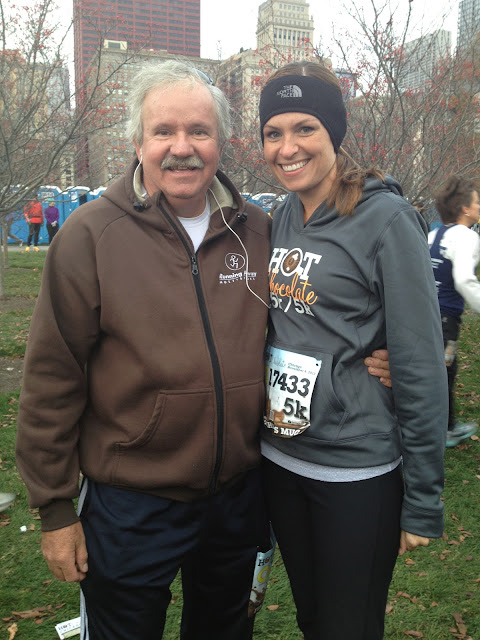 And of course, it was also great getting to run with Tara and Barb :-) 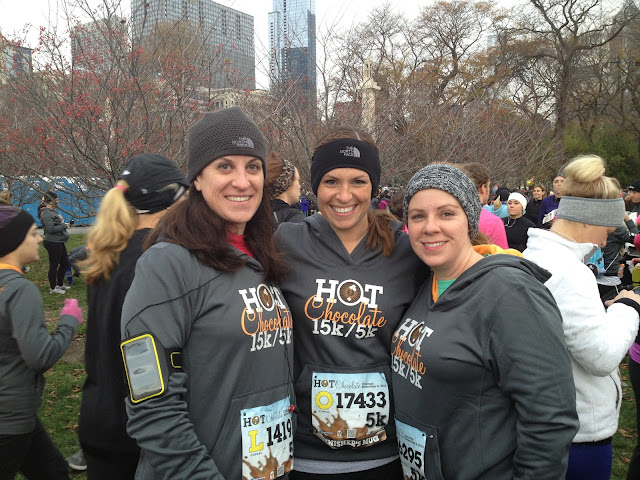 Unfortunately, we never did get to meet up with any of my other friends or family members that were there. Cell phones were not getting reception and with 40,000 people all lined up on one street... 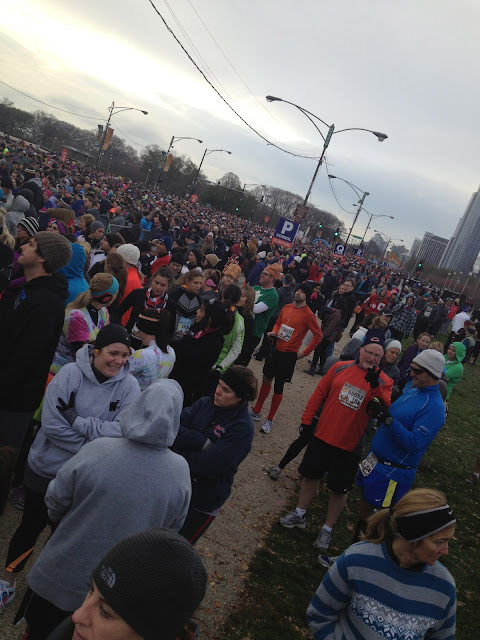 It was hard to spot anyone in the crowd :-) 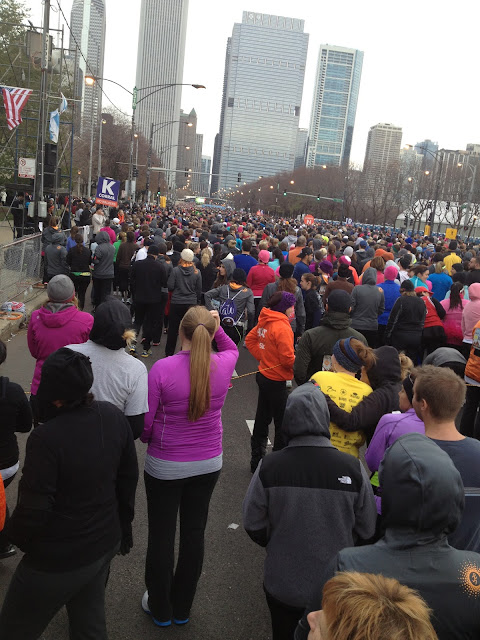 Because there were SO many people running this race, we waited almost an hour for our turn at the start so by the time we got there...we were ready to rock and roll.

And let me just tell you...my Dad kicked some SERIOUS butt on that course today!!

He kept saying that I should just "leave his slow ass behind".

I have been waiting almost a year to run with this guy so I was pumped to be there with him every step of the way. And truthfully, we jogged a good portion of those 3 miles, only slowing down here and there to stretch his sore ankle. He was a real trooper and had fun the whole time! 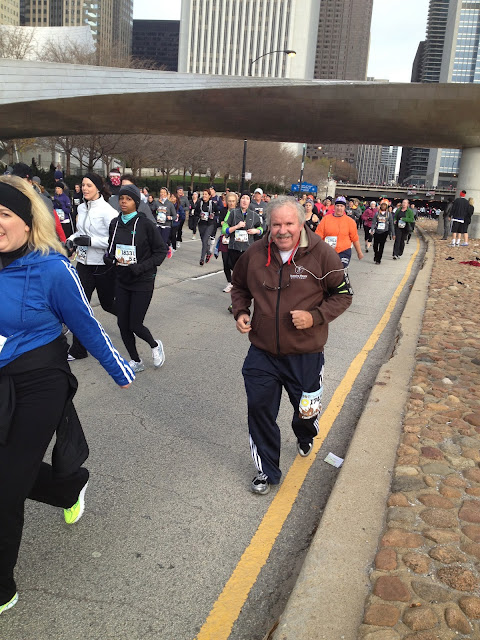 We were a couple of goof balls out there. 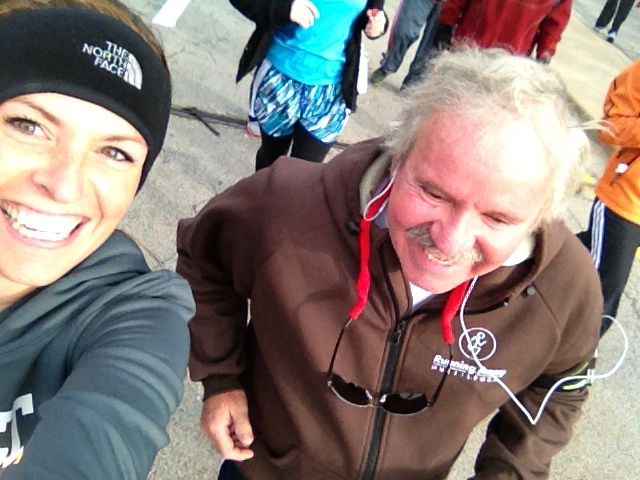 But like any race, it's all fun and games until you come to that last mile. You are already tired and hurting and then the city of Chicago throws a damn hill in your way. I kept asking Dad if he wanted to slow down and take it easy but he just kept plugging away. And then when we saw that finish line in the distance...he took off! 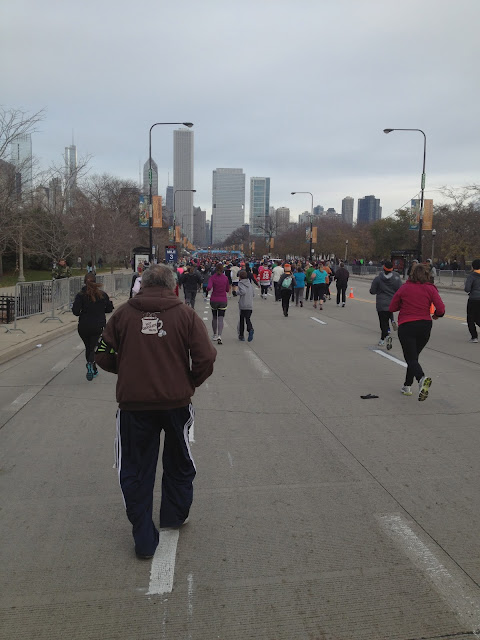 Suddenly I was chasing him down!!

We were in perfect step together holding hands when we crossed that finish line and It. Was. Awesome.

I am SO so proud of him. 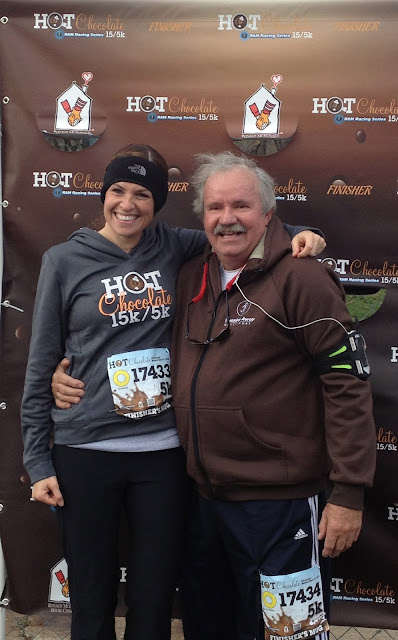 And damn it...we EARNED that chocolate today my friends :-) 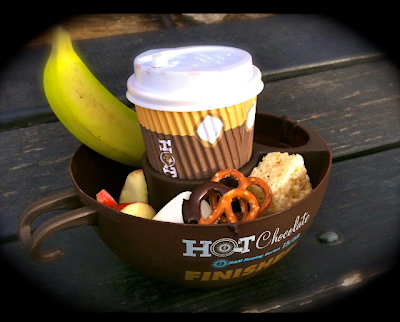 Right after the finish, we met up with Tara and Barb, who also did an AMAZING job. Both of them were freaking out last night, saying they didn't think they could make it all 3 miles. But they both did with excellent times. I am so proud of ALL my running buddies today. 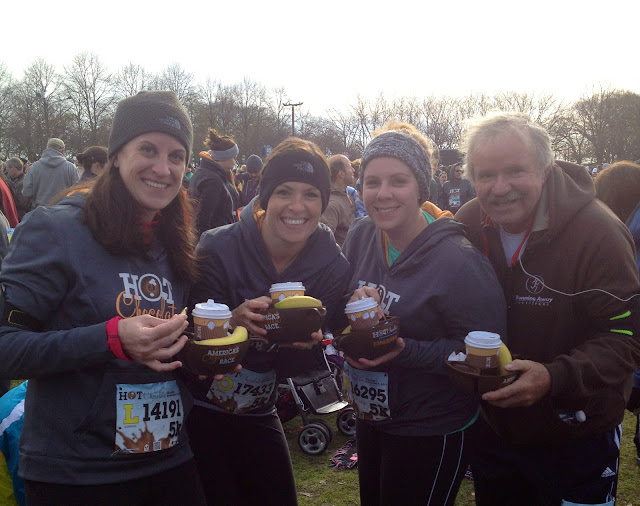 And to celebrate, we ate every bite of our snack, licked every drop of chocolate out of our bowls and chugged that hot chocolate like it was going out of style. 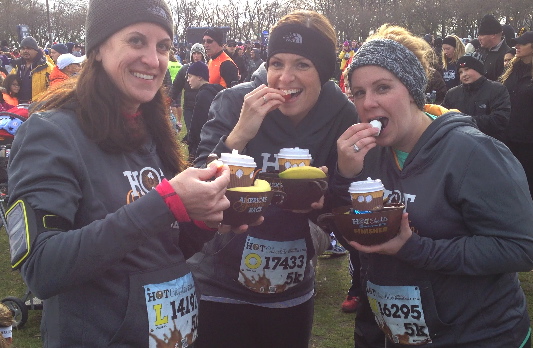 It was SUCH a fabulous day :-)

Actually, it was a fabulous weekend!!! So as you can imagine...this mama is POOPED!! Time for some shut-eye before my little monsters are up at 5:00. Damn you daylight savings!