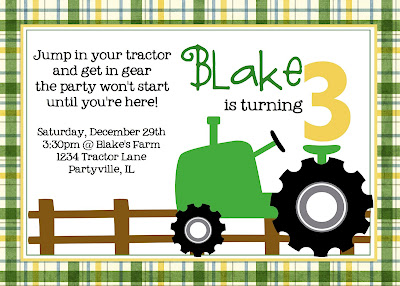 Blake was pretty obsessed with my brother Adam's John Deere tractor this summer, so I wasn't surprised when he told me he wanted a tractor party for his birthday this year.

I also wasn't surprised when he told me the morning of his party (after all the tractor decorations were out) that he wanted a Lightening McQueen party instead.

But that's okay because it didn't take much to get him excited again, especially when Addie gave him the special present she picked out and wrapped!! 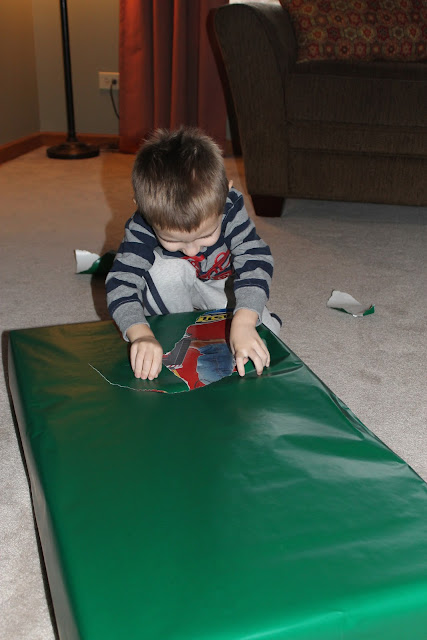 He knew just what it was when he opened it. 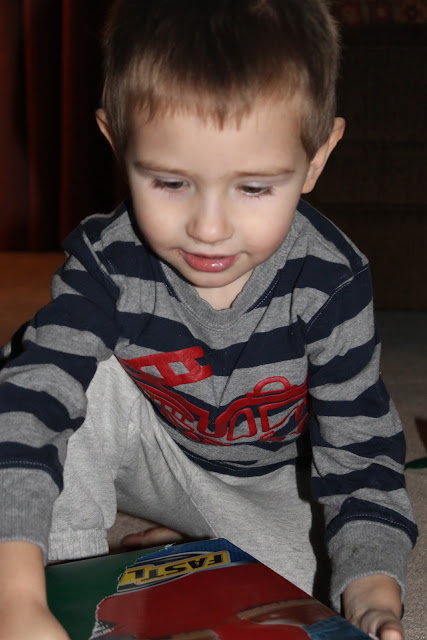 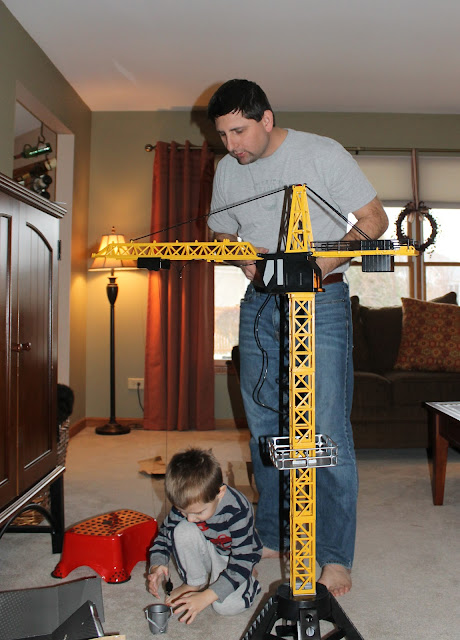 Let's be real here...I think Eric liked the gift just as much as Blake :-)

After dinner that night, we also got B-Man a little cake. Addie made sure to sing him a little solo. 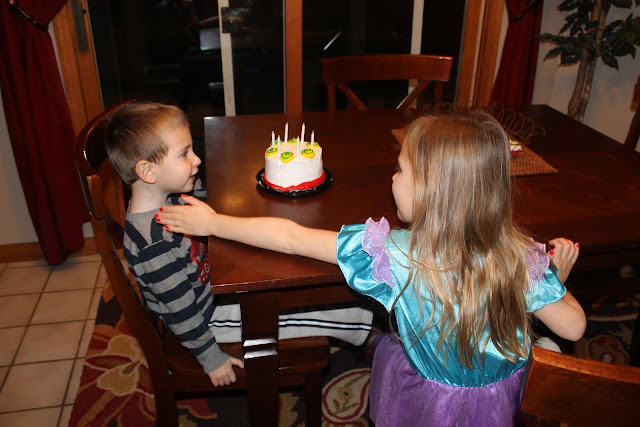 And I got two good pictures before he was covered in cake :-) 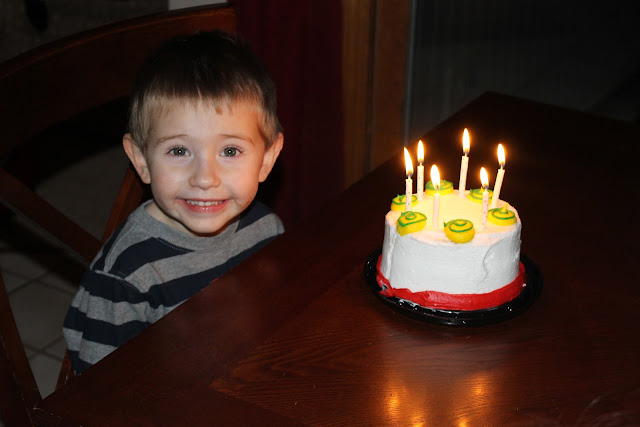 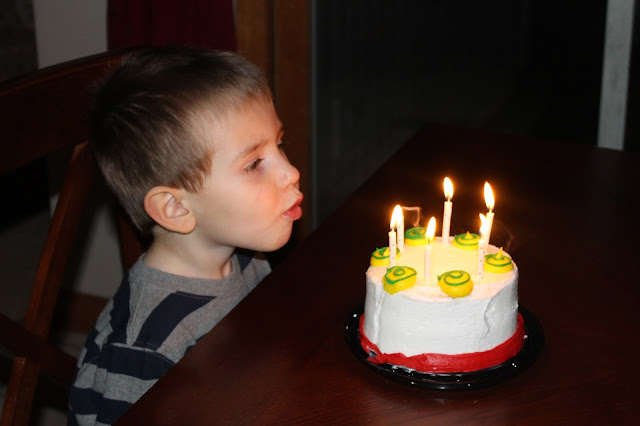 Deciding to host a birthday party at my house 3 days after Christmas was definitely not my brightest idea, especially since I am always determined to have my house de-Christmased before Blake's birthday. I spent every minute of those three days opening and putting away toys, taking down trees and garland, moving furniture, shampooing carpets, dusting and of course...making decorations. Nothing like waiting until the night before to bake 40 cupcakes and put together your own bunting banner :-)

I hate feeling so rushed and unprepared for a party but in the end, I think everything turned out really cute. 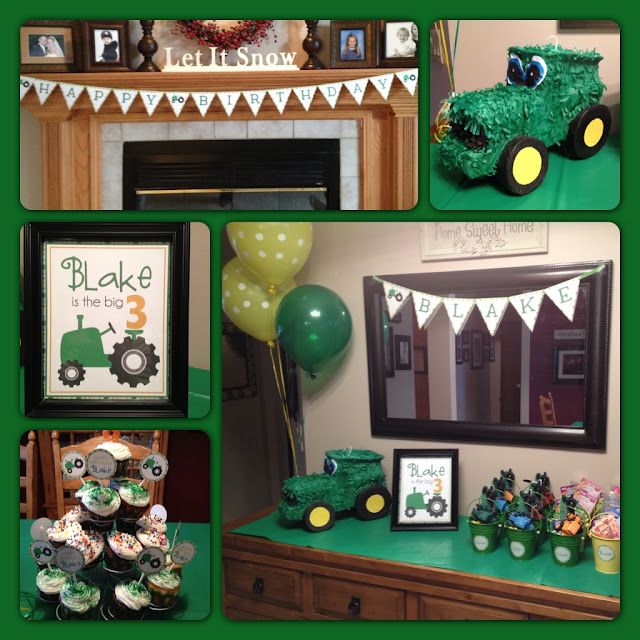 One might assume, by looking at my cupcakes, that I had Addie frost and decorate them. I am clearly not a baker my friends. But all unprofessionalism aside...these cupcakes tasted damn good this year. I think I am getting better at making them :-) 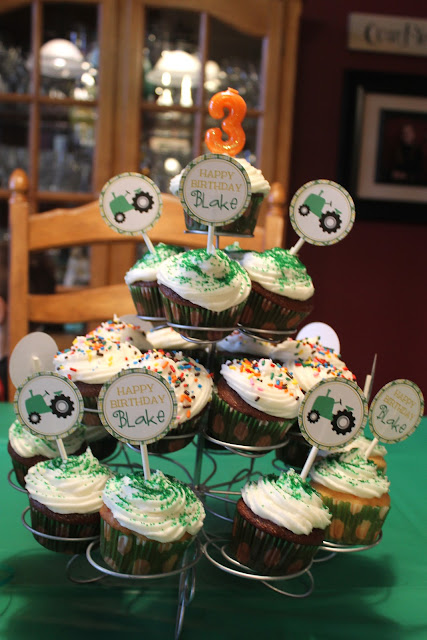 One of the things I was most excited to make for Blake's party were the treat buckets. I stumbled across so many random tractor goodies in the dollar bins the last few months. The kids were all super excited to get them. 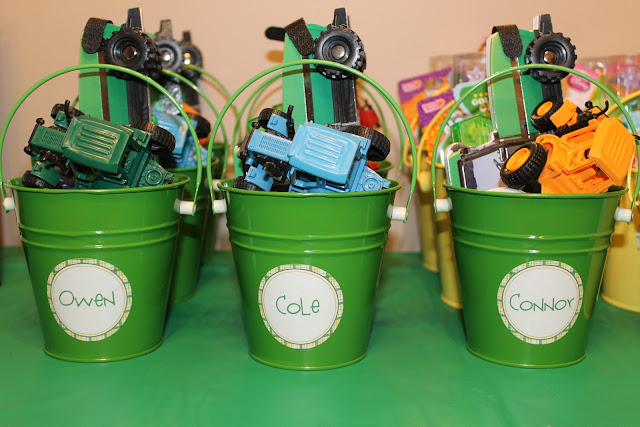 When I did the head count for the party and realized that we would have 16 kids ages 1-5 ALL under one roof...I didn't know if all of us parents would survive. But we did!!! The kids were all SO GOOD!! We had all the usual suspects there. Connor, Brynn and Cora Dollie all drove up for the shindig... 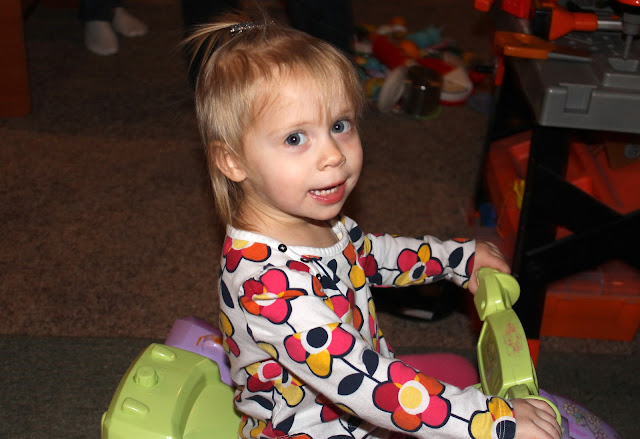 My cousin Kris and her three kiddies all made it too... 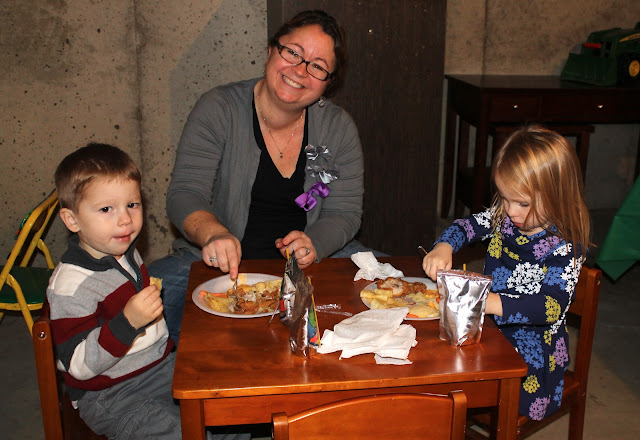 And my boy Nolan NEVER misses a party :-) 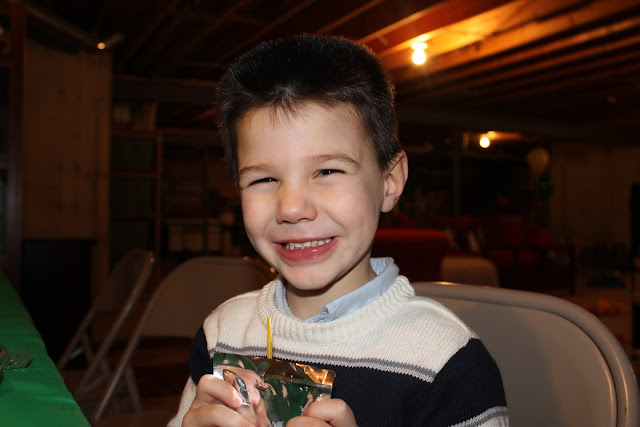 The girls all felt a little under dressed for the party so they decided to change once they got to our house. My 5 little princesses :-) 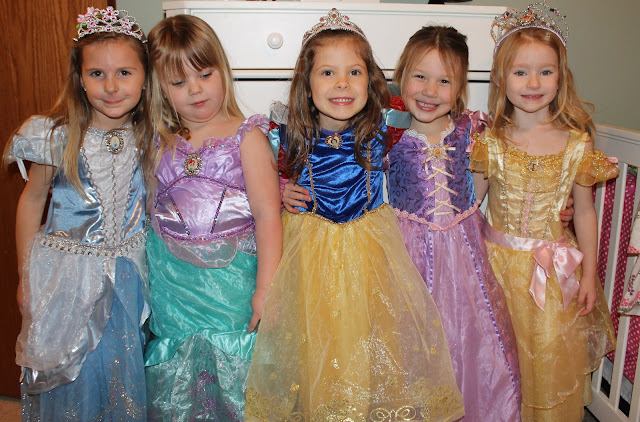 I really can't believe how well the party went with all those people in our house. The kids played great and now that we've worked out a new system for opening gifts... 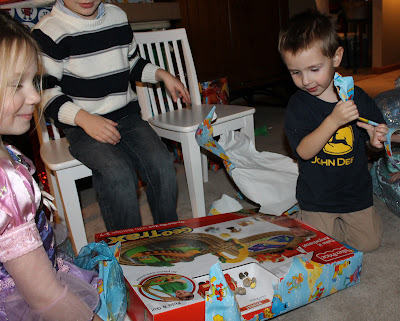 Which is having only 1 or 2 kids up at a time with Blake while he open's their gift... 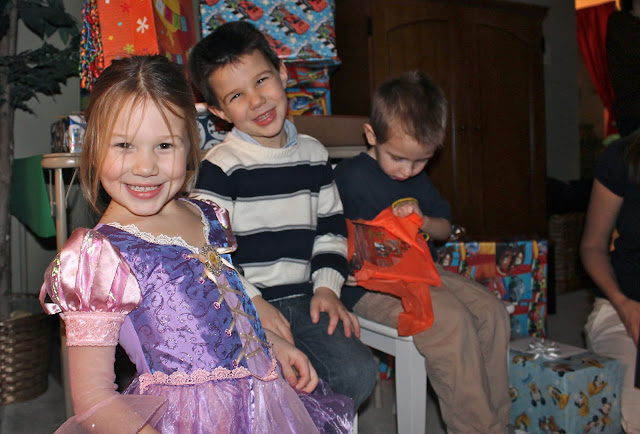 There was a lot less paper flying everywhere. We even made the Grandmas take their turn while Blake opened the TV they got him :-) 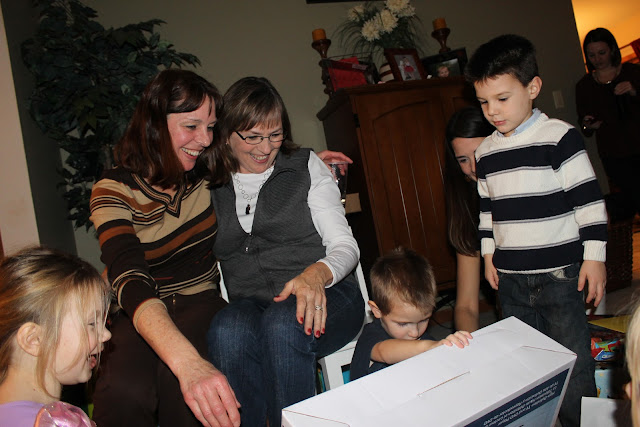 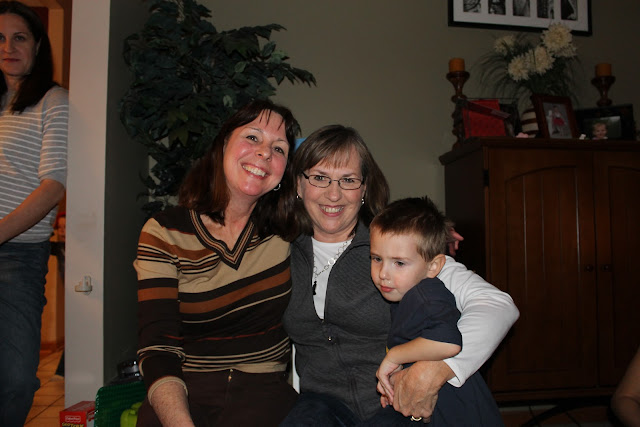 Blakey Boy has a tendency to blurt out whatever is on his mind, so I had to coach him for a few days on how to say "Thank You" after each of his gifts and not, "I DON'T LIKE THIS". I am happy to say that he did very well and took the time to thank everyone. Even Owen. 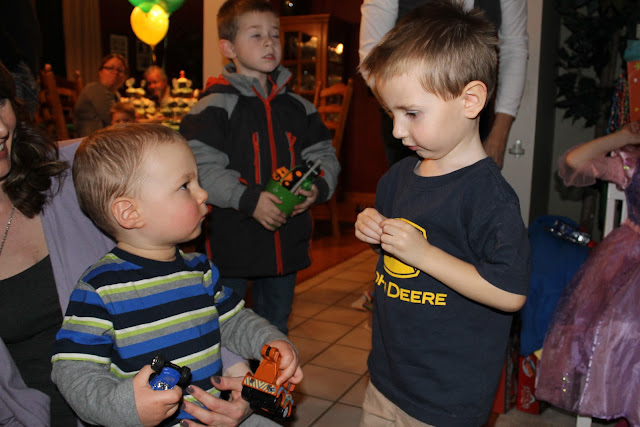 He was the only one that got a hug willingly :-) 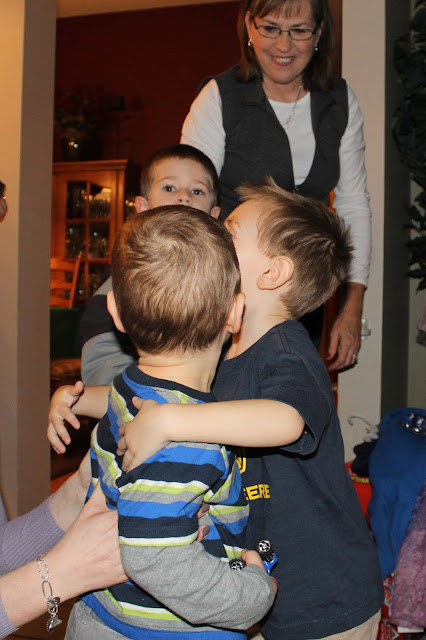 Between Christmas and his Birthday celebrations, Blake had a super busy week with a whole lot of NOT sleeping. So when I saw him about to doze off during his cupcakes... 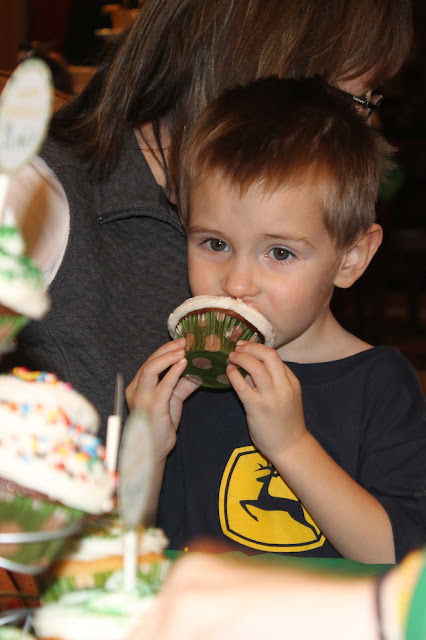 I knew it wasn't long before he'd pass out. And he did.

But that didn't stop these kids from partying!!! 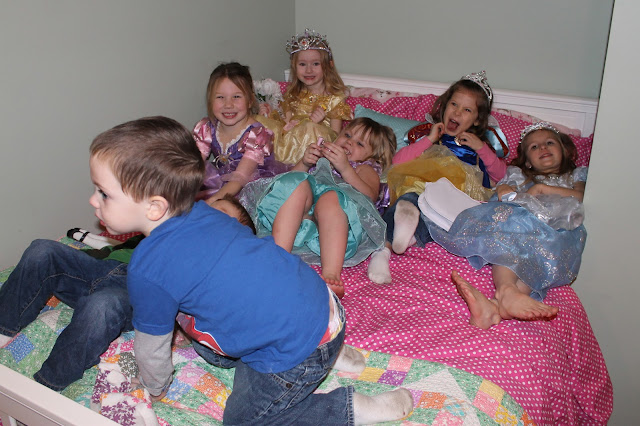 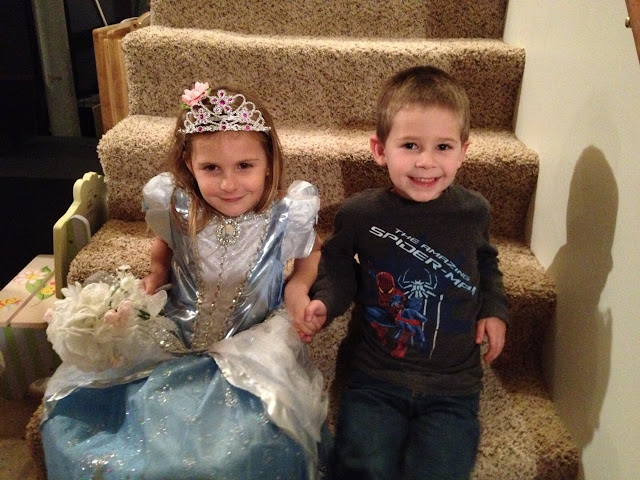 It was a great birthday and we have now fully recovered from the craziness. We are so blessed to have so many wonderful friends and family that go out of their way to make it to his party every year. He is a very lucky boy :-)
Posted by Jen at 12:12 AM