Our Weekend in a Nutshell: Two Dates, An RV Show and Another Doggie Surgery

So let's start with the sad part of the weekend and get it out of the way, shall we? 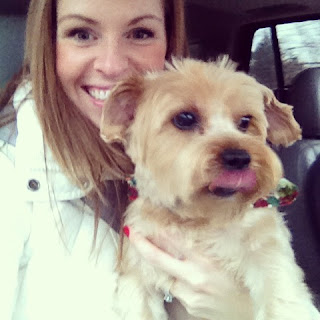 Well...this little guy is going to have his 2nd surgery next week :(

About two years ago, Howie started limping out of the blue. He wasn't acting like he was in any pain, but when his groomer told me that he wasn't putting any weight on it at all, I decided I better have it checked just in case. As it turns out, Howie had torn his ACL. Apparently this is a pretty common thing that can happen to dogs, especially ones who insist on jumping on and off beds, couches, chairs, etc. In order to fix his leg, Howie had to have surgery to repair the ACL and then recover for about 6 weeks with no running or jumping. It was a long 6 weeks for us, but Howie recovered beautifully and his leg has been perfect ever since.

BUT...the day of his first surgery, the vet told me that there was a 50/60% chance that Howie's other ACL would rupture because once a dog has one leg fixed, they overcompensate and in turn cause damage to the other leg. Well, two years had gone by and we had taught Howie not to jump up on our bed anymore (we bought him a cozy doggie bed of his own), we tried to watch him getting on and off the couch and of course we are always carful when he plays with the kids (making sure they aren't too rough with him). But sure enough...5 days before Christmas...Howie started limping again on the other leg.

But the funny thing was...the limp would come and go. He would have one really bad day where he limped a ton, and then another two days where I didn't see him limp at all!! I kept thinking (hoping) it was just arthritis or a sprain but deep down I knew. Well, this past Friday I took him back to the vet and sure enough...the ACL on his other leg has torn.

Now, if you are not a dog person (or even if you are) you may think it's crazy to spend money on surgeries for a little pet. After all, he's just a dog, right? Well, he's not "just a dog" to us. Howie is a part of our family and all of us love him with all our hearts. He drives me bat shit crazy some days, but that doesn't make me love him any less. The vet said he is too young and healthy to be put down for a torn ACL, so he told me he could give me the name of some organizations that take injured animals who's owners are not willing or able to give them medical treatment.

I mean...the THOUGHT of driving my furry little baby to some shelter and dropping him off just breaks my heart to pieces!! If Eric and I simply couldn't afford to fix Howie...that would be a different story. End of discussion. But Eric and I can afford to help him and even though that's going to take some SERIOUS rearranging of our already tight budget this year...we want to do it for the little guy. We love him and we want to see him better.

So guys...if you could..say a little prayer for Howard next Monday. Pray the he comes out of surgery without complications, that his little leg heals quickly and that he will be back to his old self by the time Spring rolls around so that he can run and play with his two best buddies :-)

This weekend, Eric and I were blessed with not one, but TWO date nights thanks to my amazing parents. It felt SO WEIRD having plans this weekend that didn't revolve around the kiddies. We missed them a ton both nights, but it was also great to spend some time catching up with friends and eating a meal while it was still warm :-) 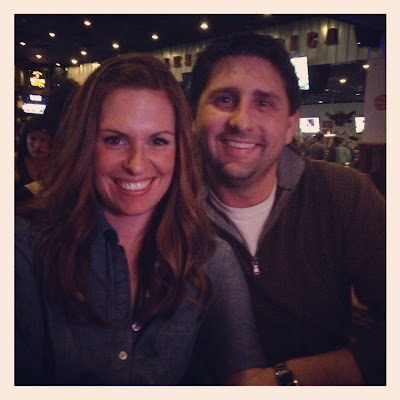 On Saturday, Date Night Part 2 took place at the Chicago Boat & RV Show. Eric and I really wanted to go because last year, the RV Show we went to in February had about 40 booths of different State Parks, Resorts and other RV destinations. They had great brochures, coupons and many of them were giving away free night stays. We just thought it would be fun to spend some time looking at that stuff instead of wheeling and dealing for a new camper :-)

We also love going to these shows just to look at all the over-the-top boats and RVs that are on the market. Some of these RVs had kitchens bigger than the one in my house!!!! And of course, Dana and I had to get a picture on a fancy boat just so we could sing "I'm on a Boat." Ha! 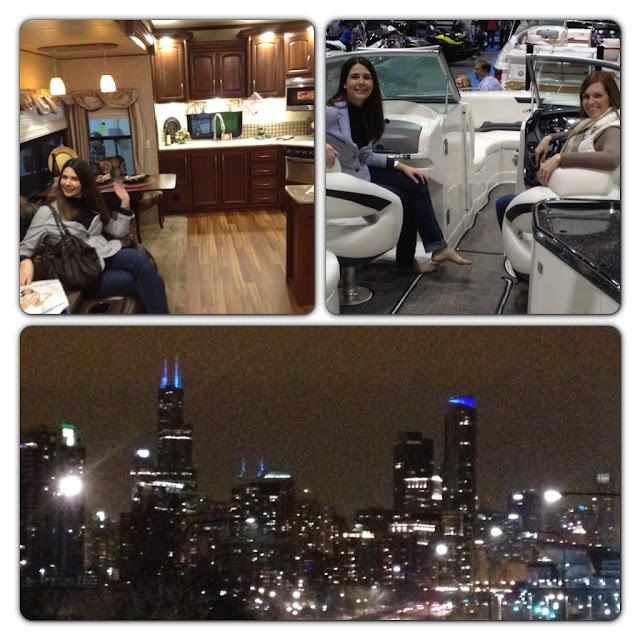 The rest of the night we spent peer pressuring Dana and Kevin into buying a camper and before the night was over, Kevin was already grabbing some business cards. Who knows...we may have some new camping buddies this year!!

Eric and I already have our next date night in the books. The next (much bigger) RV show is coming to Chicago over Valentine's Weekend and honestly...nothing screams romance like drinking an overpriced glass of wine at a trade show. Ha!

After our fun-filled date weekend, Eric and I spent today hanging with the kids and doing some much needed chores. I have been an organizing/cleaning fool this week and it feels so good to finally be making progress :-)